Take a trip around the world without leaving the kitchen 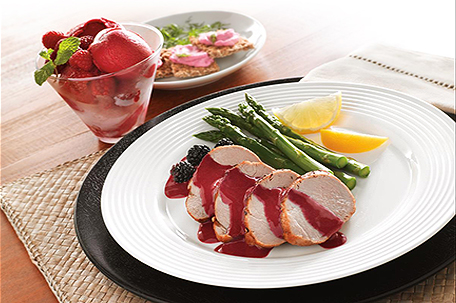 Exploring different cultures has become increasingly mainstream in today’s culinary world. Fusion cuisine has claimed its stake on restaurant menus and can make an appearance in home kitchens for less effort than you might imagine. By utilizing popular and emerging ethnic flavors, home chefs can experiment with dishes to bring an international flare to their food.

Get educated on ethnic eats

If you think the international food aisle at your local grocery store seems to be growing, you’re not imagining things. Between 2012 and 2017, sales of ethnic foods in grocery stores will increase more than 20 percent, predicts market research firm The Mintel Group.

South American cuisine is particularly hot – in flavor and popularity – with its spicy combination of native and European influences in indigenous foods like corn, peanuts, avocados and all types of potatoes and peppers.

Peruvian cuisine, which blends ancient traditions with aspects of European, African and Asian cultures, offers incredible diversity and is high on the radar of culinary professionals. In a recent survey by the National Restaurant Association, 57 percent of professional chef respondents named Peruvian food as a top ethnic cuisine for 2014. While ceviche – marinated raw fish and a staple dish in Peru – is just gaining momentum in the U.S., quinoa is another Peruvian favorite that may already be in your pantry.

Experimentation into less-familiar ethnic cuisine, from Korean to Scandinavian, is partially why pickled and fermented foods are getting more attention, according to research firm Technomic. Fermented foods pack a flavor punch and health benefits, as they can aid in digestion and nutrient absorption.

Spice things up in the kitchen

Intimidated by unfamiliar foods? Experimenting with different ingredients can take practice to find the best combination for your taste. Start with an ethnic side dish or garnish to introduce new flavors, then work your way up to a multi-course meal.

Looking to jazz up the bland chicken or pork that is a regular in your family’s meal rotation? Create a fusion dish that incorporates a delicious, Asian-inspired condiment like blackberry five spice sauce, which can quickly and easily be whipped up in a high-powered blender like a Vitamix.

Add a taste of Scandinavia to your cuisine with spices like allspice, black pepper and nutmeg. These flavors come together with garlic, onion, white bread and ground beef to create perfect Swedish meatballs. Fresh dill is also extremely popular in Nordic countries. Incorporate this fresh herb into a creamy sauce for fish or a tangy vinaigrette for salad and vegetables.

A great way to introduce fermented foods is through kefir, a lactose-free milk naturally fermented from kefir grains that originate from the Caucasus Mountains in Eastern Europe. Try it in your morning smoothie. You can also join top chefs in fermenting your own vegetables at home. Utilize them for grilled sandwiches or as a tasty side. Kimchi, a fermented Korean cabbage dish, is gaining popularity as a spicy garnish for burgers and tacos.

You can take your growing international expertise to the next level by investing in the right culinary tools.

A Vitamix machine is great for blending flavors for a sauce, emulsifying ingredients for a salad dressing, and grinding spices for a rub. The versatile Professional Series 750 can also make appetizers and entire meals, from a traditional Middle Eastern hummus to curried carrot soup.

If you’re experimenting with maki sushi, consider investing in a rolling mat and sushi grade knives. Some cooking stores even sell a sushi kit for beginners.

For Chinese and Thai specialties like stir-fry dishes and steamed dumplings, a stovetop or electric wok is a must-have.

Other ethnic recipes can be created utilizing cookware that is already standard in your kitchen. While you may never invest in a traditional tandoor oven for Indian food, you can still create a delicious flatbread with a baking stone in your oven. A slow cooker can be an asset when making curries, dal and other sauce-based dishes.

If you can’t afford to hop on a plane to an exotic locale, cooking brings culture straight to your kitchen. Do your homework, don’t be afraid of adventure, and pick up the right tools along the way. You’ll be exploring the world in no time.

1. Place the vinegar, blackberries, cinnamon, Five Spice Powder, peppercorns and sugar into the Vitamix container in the order listed and secure lid.

3. Switch machine to Start and allow machine to complete programmed cycle. Use tamper if needed.

5, Switch machine to Start and slowly drizzle oil through the lid plug opening until incorporated.

7. Blend for an additional 20 seconds.

Unleashing your inner chef is easier than you think

Brewing up fresh ideas in the kitchen: How to incorporate craft beer into your cooking