Stuffing: The essential Thanksgiving side dish 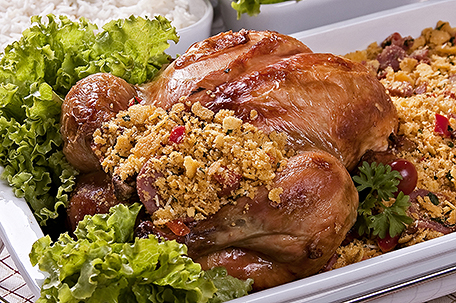 Whether you call it dressing or stuffing, no holiday meal is complete without this essential turkey side dish. The most delicious Thanksgiving stuffing is usually complemented by an array of side dishes that include steaming heaps of slow-cooked collard greens, cheesy mac and cheese, classic baked sweet potatoes, and sweet-and-tangy cranberry sauce.   At least, it was at my Aunt Muriel’s holiday table.

My late Aunt Muriel knew that Thanksgiving stuffing is the perfect buffer for all the other side dishes on the plate. She was an artful master of the holiday meal and her holiday table, which always minimally accommodated 20 eager family members, was proof.  Her Boston home was always filled with the aroma of some inviting dish. However, holidays were special. Stuffing was wonderful, but dessert also presented a notable challenge. Pies — sweet potato, lemon meringue, blueberry and apple pies. Peach Cobbler and banana pudding offered a scrumptious ending to an impeccable meal.

Whether Aunt Muriel cooked stuffing inside the turkey or made it in a casserole dish, her homemade stuffing was always the quintessential Thanksgiving side dish. She had several homemade recipes that called for a variety of ingredients.  Some included meat, some were filled with veggies and there were others that put a standout ingredient in the recipe for a non-tradition spin — oysters, sausage, fruit, nuts, and cornbread?

There are those that swear the best Thanksgiving stuffing recipe starts with a solid cornbread foundation. However, others like Aunt Muriel, who began honing her culinary skills at the age of nine on the family farm, liked bread and a more classic moist and fragrant bread stuffing. Regardless of the recipe she assembled, bringing family and friends together guaranteed the Thanksgiving stuffing would all disappear.

Is it called “stuffing” or “dressing”? Stuffing is what Aunt Muriel called the bready-casserole-goodness that soaks up gravy and sits beside the turkey. Technically, however, this is just bread dressing. It’s only stuffing if it’s baked inside the turkey, which she always did. Some prefer not to stuff their turkeys and make a casserole instead. They prefer that method because health hazards are a real concern when the cavity of the turkey is stuffed with dressing. So there is a real need to make sure the stuffing is completely cooked. The turkey must also cook more slowly.

When you’re mixing dried bread, meat, herbs, and butter, it doesn’t seem possible that all of it will come together in a smooth, home-style stuffing.  But pour in a good measure of turkey broth and butter, and suddenly this is a moist and fluffy Thanksgiving classic.

Aunt Muriel believed the key to great homemade stuffing is the broth. She held that stuffing or bread dressing has a bare handful of ingredients, so they have to count. She always said that boxed chicken or vegetable broth will do just fine, but the best stuffing is made with rich, savory, homemade turkey broth — the richer, the better.

Here’s how to make a scrumptious stuffing, one that is so indelibly connected with Thanksgiving or any time you like. It’s remarkably simple, and so good.

Dry the bread. Arrange a rack in the middle of the oven and heat to 225°F. Spread the bread cubes on a large, rimmed baking sheet in an even layer. Bake until quite crisp, stirring every 30 minutes, about 90 minutes total. After removing the bread from the oven, turn up the oven temperature to 375°F.

Add the herbs. Stir in the sage and thyme and cook for 2 minutes more. Remove from the heat.

Whisk the eggs and broth, and mix in. Place the broth, eggs, and salt in a medium bowl, season with a generous amount of pepper, and whisk to combine. Pour over the bread mixture and stir until evenly combined. Add extra broth is more moisture is desired.

Put into a baking dish and top with more butter. Lightly grease a 9×13-inch or 3-quart baking dish. Transfer the bread mixture into the baking dish and spread into an even layer. Melt the remaining 2 tablespoons of butter and drizzle over the top.

Cover and bake. Cover the baking dish tightly with aluminum foil. Bake for 25 minutes. Uncover and bake until the top is golden-brown, about 15 minutes more.

Have a fun and flavorful Friendsgiving with simple, delicious recipes

Ten ways to have a hassle-free Thanksgiving