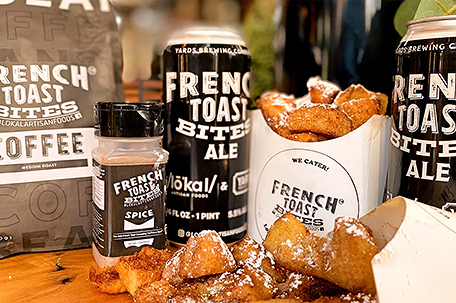 May 28, 2021 Category: Food And Beverage Posted by: Philadelphia Sun Staff

Thanks to her partnership with Yards Brewery, Charisse McGill has made history by turning her French Toast Bites into a beer. And you’re going to want to try it.

I know. I get it. Most of us wouldn’t put those three words together.

While dishes combining breakfast and dinner foods like chicken and waffles and shrimp and grits are pretty common, and even tasty, the combination of French Toast and beer has probably made me lose some of you reading this column. Heck, when I first saw it, it made me scratch my head a little.

But if you go to the Yards Brewery at 500 Spring Garden St. and ask for a glass of the new French Toast Bites Ale, you might just see that it’s not as odd a combination as you might think.

Lokal Artisan Foods, the folks responsible for those French Toast Bites you can’t get enough of at the Cherry Street Pier and the Spruce Street Harbor Park and Yards Brewery, creator of some of the area’s best root beer, have joined forces to create French Toast Bites Ale, a beer inspired by the street food.

Last year, Charisse McGill, the head of Lokal Artisan Foods, became the first Black woman in Pennsylvania to have her own beer when she created a small, limited edition batch with Doylestown Brewery that was, literally, an overnight sensation.

But while that partnership ended, McGill saw that her beer was popular and wanted to keep it going. So, she started asking around.

“I went to one another friend, Dave Goldman at Urban Village Brewing to see if he could help,” she said. “He said that he couldn’t make the commitment, but he suggested Yards. So, I called.”

She found herself talking with Yards CEO Trevor Prichett.

“Before you get into a partnership with someone, you have to get to know them and see if you have similar values and an approach to business,” he said. “’Charisse is a really inspiring, positive thinking entrepreneur. I knew we could work together.”

The months long collaboration between McGill, Prichett and the brewers at Yards resulted in a beer that has an English Style Amber beer as its base, he said. The beer has a malty backbone, which allows it to carry the flavors of French Toast.

So, we’re now at the moment of truth. How does French Toast Bites Ale taste?

I admit that when I heard the phrase “French toast beer,” I thought that it would be closer to a dessert beer than something you could drink with a plate of wings and some fried Brussels sprouts.

But it wasn’t. The maple in the beer’s base enhances the cinnamon and vanilla in it. It was really tasty, and as someone who doesn’t really drink beer, I found it enjoyable.

The first batch of 2,500 cases was released last week, and is selling well, McGill said. In the future, there’s the possibility of other French Toast Bites Ale flavors, she said.

The beer comes in 16-ounce four-packs for $13.99. You can find French Toast Bites Ale at The Garden At Cherry Street Pier and at the Yards Brewery, 500 Spring Garden St. for $7 a pint on draft. You can also get it delivered to your home via the goPuff delivery service. ACME markets and Total Wine and Spirits stores will also be carrying it soon.