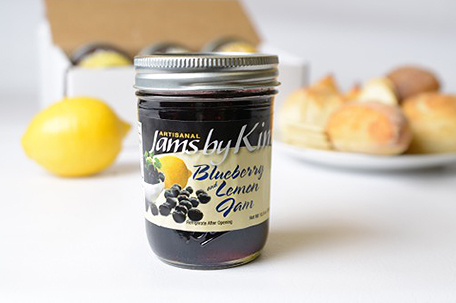 May 13, 2016 Category: Food And Beverage Posted by: Philadelphia Sun Staff

Kim Osterhoudt thinks your ready for Jams By Kim.

Last month, I went to the Philly Farm and Food Festival and tried a variety of foods ranging from cheeses to hummus to hard apple cider and craft vodkas and bourbons.

But of all of the foods that I sampled that day, there’s only one thing that I bought. It was a jar of Blueberry and Lemon jam so incredibly good that I ran to the Reading Terminal Market to buy a loaf of whole grain artisan bread to eat it with. 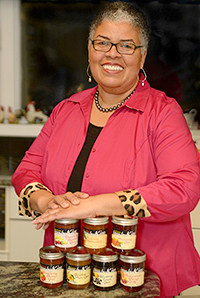 The jam came from a company called Jams By Kim, and founder/CEO Kim Osterhoudt has created a product so full of flavor that it’ll make you invent things to put it on.

(At the end of this story, we’ll have recipes to get you started.)

Making jam has been a big part of Osterhoudt’s life since she was very young, she said.

“I made my first jam when I was 12-years-old and I loved it,” Osterhoudt said. “My Mom was a big cook and she canned everything. I began making jam for my family and friends ad it’s always been a part of my life.”

When she was laid off from her position as a Corporate Human Relations manager for Prudential Financial in 2009, Osterhoudt found herself at a crossroads, she said.

“I polished off my resume to look for another job,” she said. “But I was encouraged by friends to start my own business.”

So she started making jam. At first, she made the six that were her family’s favorites, which included flavors like raspberry, peach and blackberry.  But since then, with the help of her faithful taste testers, she’s amassed 40 different flavors of sweet and savory jams.

“I love mixing flavors,” she said. “I have no shortage of taste testers between my family and my book and dinner clubs. I love the creativity of it.”

She’s since also added a line of jellies and marmalades to her portfolio of flavors. The jellies include a pinot grigio and a pinot noir that have become really popular with those customers that like their spreads with a little zing.

In addition to being featured at various farmers markets in Northern New Jersey, Osterhoudt and Jams By Kim made their first appearance at the Philly Farm and Food Festival as the guest of Edible Jersey, a magazine that chronicles the state’s artisan food scene that named Jams By Kim one of its next big food brands.

Want some? You can purchase Jams By Kim online at www.jamsbykim.com.

And as promised, here are some recipes:

(Made with my favorite Jams By Kim jam…)

1 teaspoon of Jams By Kim Blueberry and Lemon Jam

Fill a cocktail shaker with ice, add the cranberry/blueberry juice cocktail, the vodka and the Blueberry and Lemon Jam. Shake well, strain into a martini glass, and garnish with a twist of lemon. For a virgin Martini, use seltzer in place of vodka.

Combine the yogurt, whipped topping and jam. Place the sliced berries in the bottom of each tart shell and spoon the yogurt/jam mixture over the fruit. Refrigerate for at least an hour, or overnight. Garnish with a few sliced strawberries and serve. Double this recipe if you want to use a full-sized Graham cracker crust.

Master of the bar: Easy tips to create the ultimate bar at home