Munchies: The Food Of History 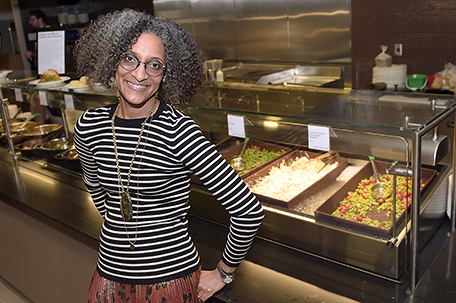 ABOVE PHOTO:  Carla Hall, the Chew co-host and Top Chef alum, poses for a photo inside the North Star Cafe at the National Museum of African American History and Culture in Washington. The museum, opening later this month, will be an experience aimed at feeding the soul, literally. The Sweet Home Cafe is the museum’s restaurant, with a menu featuring culturally authentic fare and modern-day-inspired foods. The restaurant is a journey through the agricultural south, Creole coast, northern states and the Southwest.  (AP Photo/Susan Walsh, File)

The National Museum of African American History and Culture has plenty to check out. Make sure to include the Sweet Home Café.

“Tell me what you eat, and I will tell you who you are.”

When the Smithsonian Institute announced the press tour for the National Museum of African American History and Culture, I wanted to go because I was looking forward to seeing how the museum told the story of the Black community.

With 37,000 artifacts, I knew that the museum would be a feast for the eyes. From a South Carolina slave cabin to one of the last planes used to train the Tuskegee Airmen, to the Parliament-Funkadelic Mothership, I knew there would be a lot to take in.

But going through 12 exhibits in a 400,000 square foot building can make you hungry, so I was also interested in the food.

The Sweet Home Café in the NMAAHC is a place where you can get something good to eat, and learn a little something as you eat it.

“One of the best ways to get to know a culture is through its food,” said Hall, who opened her first restaurant, Carla’s Southern Kitchen, in Brooklyn in June. “The National Museum of African American History and Culture will allow visitors to experience the history of African American people by showcasing the important role food plays in our lives.”

Traditionally, when one thinks of African American cuisine, Southern dishes, or so-called “soul food,” is what comes to mind. Sweet Home Café Executive Chef Jerome Grant, went a different way. The café’s menu tells the story of the Black Migration in a way, he said.

“Each of the four regional stations in Sweet Home Café demonstrate the migration of African American people and culture through foodways,” he said. “While the café will showcase the very best versions of classic dishes, guests will also be surprised by new choices.”

Like it was with the museum itself, the Sweet Home Café menu was kinda big to get through. They offered samples of quite a few of the things that will be available for folks to purchase, but I didn’t get everything.

What I did get to try, however, was for the most part really tasty.

I started out in the Creole Coast, which is a blend of several different cultures including West African, Native American, Portuguese, French and Spanish. I had some lightly fried chicken with white barbecue sauce and corn bread. I’ve seen white barbecue sauce on “Diners, Drive-Ins and Dives” before, but I had never had any. Surprisingly, despite my natural disposition to red barbecue sauce, I really liked it. 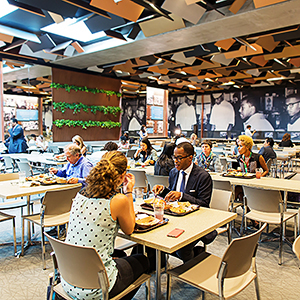 Patrons indulge in the varied and delicious food offerings at the Sweet Home Cafe’ at the National Museum of African American History and Culture in Washington DC.
Photo: Courtesy of NMAAHC

In the North States section, it was cinnamon roasted heirloom carrots, pulled barbecue with cole slaw, turkey with hoecakes and apples, Yankee baked beans and “Smoking Hot” Caribbean Pepper Pot, a dish made with short ribs, and a spicy, tomato sauce.

It was the first time I had ever had pepper pot, which was served with the Yankee baked beans. While the sign said, “smoking hot” in the title, the spiciness in the dish kind of sneaked up on me. It was tasty, though. And I really liked it with the cinnamon roasted Heirloom carrots.

I didn’t get to the Western Range section, because after eating all of that stuff, I was kinda, well, stuffed. But I did get to try a little of the Son of a Gun stew. It was full of flavor. 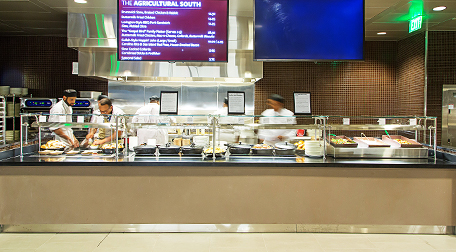 Sweet Home Cafe’ at the National Museum of African American History and Culture in Washington DC.
Photo: Courtesy of NMAAHC

In addition to the dishes I mentioned, there’s also more standard fare like burgers, fries and a kids menu. But if it’s a choice between a burger and some “Smoking Hot” Pepper Pot, I’m going for the Pepper Pot every time. I especially hope to try the Gulf shrimp and Anson Mill stone ground grits with smoked tomato butter, caramelized leeks, and crispy Tasso ham.

The Sweet Home Café is open from 10AM-5PM when the museum is open. Lunch is served from 11AM-3PM and entrees range from $8 to $15.

The restaurant is a collaboration between the Smithsonian, Thompson Hospitality, a minority-owned business based in Reston, Virginia; and New York City-based Restaurant Associates.

Carla Hall is renewing the business of soul food