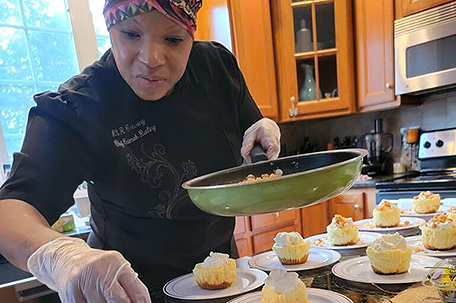 While she has catered for various organizations and private affairs, Chef Naima Rutling is happiest when she’s teaching people in need of a second chance to become the next generation of chefs.

If you don’t know exactly where you’re going on Camden’s Federal Street, you might drive right past the Cathedral Kitchen.

The organization, which began its mission of feeding the hungry in 1976, provides help to people in Camden in need of it. While the CK Café has been closed due to COVID, it’s been repurposed as a food pantry that allows those in need to get much needed food. The large dining room isn’t open, but that doesn’t mean that the people who come there for a hot meal served with dignity aren’t getting what they need, said Noreen Flewelling, the organization’s development director.

“We serve about 1,300 meals a day to people who come here and to the shelters that the Volunteers of America runs,” she said.

The people who make these meals for the Volunteers of America and the patrons who come to the Cathedral Kitchen for meals are members of the organization’s Culinary Arts Training program. Under this program, people who are looking for a second chance or a new profession are taught everything they need to become professional chefs,

Many of the people who work to produce the meals at Cathedral Kitchen are people who have come through the organization’s culinary arts program. The 15-week course is for people aged 18 and up and teaches students how to make good, nutritional meals, helps them to earn a Safe-Serve certificate, and ultimately, find a job in the culinary industry. Job placement that takes the student’s circumstances into account is included with the classes.

But the classes are where Chef Naima Rutling comes in.

The North Philadelphia native and owner/operator of HER Catering By Chef Nai is one of the instructors at the Cathedral Kitchen. In addition to showing the students proper knife skills and how to prepare such things as “mother sauces,” she also helps her students — many of whom have been through a variety of circumstances including homelessness, addiction, and abuse — find out that there’s light at the end of their personal tunnel.

And that they’re walking toward it.

“We don’t just cook,” she said. “I also act as a counselor to them. I can relate to my students, because I’ve had similar experiences to them. I tell them that if they fall, they can get up and keep going.”

And it is those experiences that Rutling shares not only through her teaching, but also through her food. From providing healthy meal plans for the people she works with as a fitness instructor to catering such things as gala events, wedding receptions and private dinners for two, her experiences and the experiences of those she loves are on the plate.

Rutling began cooking as a child, she said. Her father was a cook in the Navy and her uncle worked at various restaurants around the city drawing inspiration from her father, who worked in just about every restaurant in Philadelphia after serving in the Navy, she said. Her home economics classes at George Washington High School also motivated her to keep cooking.

“I was already a caterer as a child,” Rutling admits. “My mother used to tell everyone ‘Don’t touch her food!’ because if it was messed with, that would make me feel some kind of way. I wanted to be in the kitchen.”

She graduated from the culinary arts program at the Art Institute of Philadelphia and helped open the Xfinity Live! venue, as well as designing menus and creating the food program for the Broad Street Bullies restaurant. She was also a consultant for the Outback Steakhouse in Bensalem, operating the back and front of the house, meaning that she not only kept track of what was going out on the plate, but also how much it costs, something that benefits her a lot as a caterer.

Much of the food Rutling makes is not only good, but healthy. Health problems among the people in her family made her more conscious of the role that food plays in keeping you healthy. Toward that end, she also helps people make their way toward better health as a fitness instructor. She teaches kickboxing, and spin classes in addition to showing people recipes which illustrate that good food can also be good for you.

“[Being a fitness instructor] impacts how I cook a lot,” Rutling admits. “I’m aware of the needs of people and food. Not everyone is going to eat the same way. Some people have gluten free diets. Some are vegans. When you’re in the food industry, you have to know what’s going on with the inside of the body.”

If you’d like to try some of Chef Naiima Rutling’s delicacies, you can reach her via email at [email protected] or call or text her at 267-970-3246. You can also see the dishes she makes on her Facebook page, HER By Chef Nai Catering.

Turn a gourmet kitchen into a chef’s studio; kitchen design tips from a professional chef