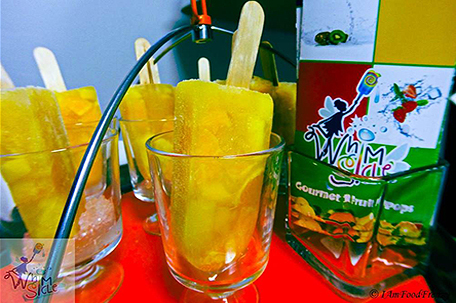 If you haven’t had a Whimsicle yet, you need to.

There are few things harder than being a diabetic food critic.

Sure, you get to try all kinds of food as a food critic, but you still have to keep a tight eye on everything that you eat because of the diabetes. It’s a lot of moving pieces.

When I met Salim Weldon and his nephew Naim at the Media In The Middle event last Saturday, I didn’t think that I’d be able to review his product because, well, it was a popsicle…and popsicles aren’t necessarily diabetic-friendly.

But since one of Whimsicle’s first customers was Weldon’s late grandmother June, who was a diabetic, I’m glad that I got to try one.

And I think you should too. They’re really tasty and it’s a way to get fruit into your kids that doesn’t say “Hey kids! Here’s some fruit!”

The pops are 100 percent organic fruit with a natural sweetner, the recipe for which Weldon won’t divulge. You can get pops with strawberries, kiwi, mango, grapefruit, tangerines, grapes and bananas. There is even a line of yogurt pops that can serve as a breakfast pick-me-up. 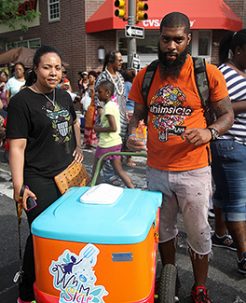 PHOTO:  Tonae Simon and Salim Weldon are the co-owners of Whimsicle.

Weldon’s partner, Tonae Simon had been making the popsicles for children’s parties, but when he found out that his grandmother, who was in a nursing home and battling diabetes, wasn’t eating right, he sprang into action.

“My grandmother loved fruit, but she couldn’t eat it all the time because of her diabetes,” Weldon said. “I gave her one of the popsicles. She ate it and she loved it and her doctors were amazed because it didn’t cause any problems with her blood sugar.”

Since then, thanks to a social media campaign that started with people putting pictures of themselves with the popsicles on their Facebook pages and Instagram and Twitter feeds, Whimsicles have been everywhere from a wedding in Paris, to a series of celebrity parties to an upcoming event for Jay Z’s Roc Nation label that was put together after a meeting at the “Made In America” shows.

Even President Barack Obama has had one…

“We did a campaign fundraiser for the Obama campaign in Chelsea,” Weldon said.

But while it’s nice to be able to hand superstars from all over the world an all-natural treat, Whimsicle is more than just a pretty face. With a team consisting Weldon’s nephew Naim, Amurri Lauren, and Tyra, Simon and Weldon hope to make Whimsicle part of something much bigger.

And it all comes back to Weldon’s grandmother.

“I want to use these to fight childhood obesity and diabetes,” he said. “This is more than just a popsicle. I want to change the world and help people eat healthier.”

If you want to get a Whimsicle, and you should, you can order them on the company’s website, http://mywhimsicle.com. The pops are $4 apiece, which is really good considering that you’re getting a frozen pop made with real fruit, or real yogurt and fruit.

Creating super summer snacks with grapes is a breeze