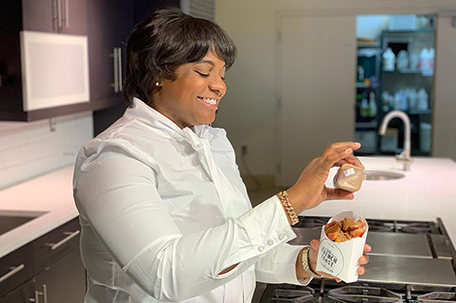 When one meets Charisse McGill for the first time, you are immediately drawn to her refreshing face filled with honesty and a genuine smile as she speaks of her newest venture in business, Lokal Artisan Foods, home of the Loaded French Toast Bites.

This is a woman who is not only a business mogul in her own right, but she is also intentional about customer service being the key to thriving and surviving beyond the pale. She envelopes you with a warmth and vibrancy that is a delight to be around.

Born in Pittsburgh, Pennsylvania as the only child to a father who is a commercial contractor and a mother who spent 35 years in hospitality for a major airline, McGill was bitten by the Philadelphia bug when she attended Temple University and attained her first degree, a BS from the School of Tourism & Hospitality. She is currently an MBA food marketing candidate at Saint Joseph’s University.

When McGill graduated from Temple in 2003, she never looked back, and while acknowledging that Pittsburgh has fond memories for her, she said Philly was “popping,” and began forging a life here.

She started her career with a full time national conference planning business and was also teaching hospitality and culinary arts at Benjamin Franklin High School. When she lost the largest client from her business after seven years, she decided to find a way to recoup the financial loss by taking on the opportunity to manage the Lansdale Farmers Market. Once hired, she became the first woman of color in the Tri-State area to ever hold that position.

McGill has been the manager for the past seven years, where there were 22 vendors in the beginning. It has grown tremendously since.

In full disclosure, McGill was still feeling the pinch of losing her largest client and trying to survive on a teacher’s salary, so for the first few weeks it was more like a side hustle for her. On top of that, she really had only visited a farmers market once, by accident, so she had no real idea of the possibilities in front of her.

After learning from a vendor who made $300 in two hours from selling pound cakes, it became clear McGill was surrounded by entrepreneurs. Her goal, then, was to build the market in order to sustain their businesses and lives.

“I began to realize, that people were making hundreds of thousands of dollars a year, under these little white tents,” she said. Her turning point became her daughter, who decided she wanted to start her own business selling lemonade from locally sourced fruit. When her child made over $6,000 in four Saturdays at the market, McGill began to churn some ideas in her head regarding her own business ideas, since the overhead was pretty negligible, and went to work creating what is now popularly known as the “Stuffed French Toast Bites.”

Borrowing the seed money from her daughter (which she has since paid back) the testing of the product, taste, flavor, sizes they should be so they are easily consumed, the perfect recipe, and even the packaging all happened with the help of a friend and chef in her kitchen.  Lokal Artisan Foods was born.

McGill took this so seriously that she became an Uber Eats driver for a day so that she could see how food was packaged and carried.

Like any entrepreneur that starts with a new venture, she was nervous at her first event, only to realize that her French toast bites were viewed as desserts and that she was there long after the other vendors were gone. People were waiting in long lines to experience this thing that wafted all across their senses, once dinner wore off.

“The key to all of this and [to] any business, is how we treat each client as if they are our very first one, smiles are always on our faces, we make the French toast bites on site so they can see the process to the finished product and people love it,” she said.

McGill went on to explain that it was also crucial to never run out of food, open in a timely fashion and make the food affordable.

“People will never remember it as a good experience if you run out of food, because word spreads, and you will lose potential clients who may not take the risk to drive out and be disappointed when they get to you,” she emphasized. “It is better to give food away to employees at the end of the night than to ever run out.”

Her company also created and sells bottles of French toast seasoning, which will be coming to a shelf in local markets soon, even as she is opening her first brick and mortar store in Piazza Pod Park.

McGill will tell you that she became fully successful when she stopped toeing the line between dual careers, quit her job and jumped in fully, and it is that sage advice, she offers to budding entrepreneurs everywhere.

“When l left my last employer, in a few short months, l earned 60 percent of the yearly salary l was making,” she said. “My goal is to be the “Auntie Anne’s” of French toast bites, with locations all around the country.”

Judging by what she has done so far with hard work, design and research, it is not a stretch to believe that this young woman and Lokal Artisan Foods will be household names in short order.