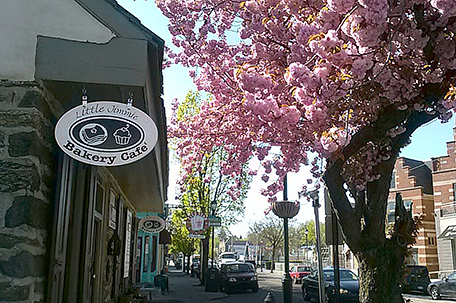 It was a cold and rainy day but after entering the quaint former 17th century schoolhouse, that’s when Jimmie’s cafe, weather woes dissolves into a pleasant sensory experience as soulful R&B melodies and the aroma of fresh coffee and delectable baked goods bend my face into an inviting smile.  First appearing on the Mt. Airy scene in 2011, Little Jimmie’s Bakery Café is now a staple for the community, an amiable alternative to your regular café experience. And if you don’t believe it, take heed from the motto above the doorway: ‘Enter a guest, leave a friend!!”

A native of Charlotte, North Carolina, Jimmie Reed lived in four other states before calling Philly his home base.  Once he walked through the entrance of City Hall and onto south of Broad Street, the lights of the city entranced him, and he knew this was where he would build his brand.  The culture, atmosphere, and diversity of the North had always enticed him, but Philly, is “the city of neighborhoods,” and therefore has more neighborhoods for him to potentially branch his future cafes.

After being laid off by corporate America, Reed knew he wanted a career where he would always be guaranteed a job, and thus he was intrigued in culinary arts.  Once finished with his studies, he worked at Starbucks, Chipotle, and the Corner Bakery gainning all kinds of business and kitchen savvy.

He can create all kinds of treats any foodie would admire, but he likes the challenge of baking the most, with croissants and Danish dough his toughest tasks.  Never forgetting his Southern roots, he puts a twist on beloved family desserts such as sweet potato pie, but adds the extra loving dose of sugar and butter.  (Just try the chocolate cake if you’re a non-believer.)

The youngest of four, his mother influenced a lot of Reed’s philosophy on life.  “My mother told me never to turn my back on those less fortunate!” he said, “And I especially won’t turn my back on black people.”  At Little Jimmie’s Bakery Café, there are five people he has on staff, all of which are young black males who aspire to be in the culinary field.

There are not enough of the right kind of role models for black males in the community, and this makes if difficult for them to seek positive avenues, Reed said.  This is one thing that really upsets him because he knows these young men have the potential, they just need the right kind of guidance.  “A lot of African American males get treated poorly and I don’t like that, he said.  There are young men up and down the block every day asking for jobs, so I do what I can to help those who need it.  Not everyone is going to go to college, but we can still give them a trade or skill to gain a better quality of life.  It’s not often you’ll see African American males offering great quality food and service, and I’m doing my part to change that. ” 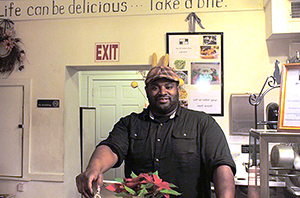 A lot of the youth know what type of expensive shoes they want, what attractive women to chase after, but far fewer know how to manage their credit or properly maintain their own house.  These are some of the things Reed says young men should learn from the men they look up to and praise instead of the former, superficial lessons they absorb.

Reed plans on adding six more men to staff his new business venture: Little Jimmie’s Bake House.  The new establishment, set to open early in the New Year, will be located on 6616 Germantown Avenue and still have the same atmosphere as his beloved café, complete with the signature black and white décor with hints of colonial red and the same cozy feel.

The difference is that this new facility will become the main hub for the Little Jimmie’s brand and where all of his baking will take place. It will act as a headquarters, delivering to the other Little Jimmie’s Cafés he sees in the future.  Reed is excited about opening the bake house, as he will serve breads and cakes; roast his own brand of coffee, have affordable wedding cake options, and serve gelato.

No one in Northwest Philadelphia is selling gelato, so fans will be lining up to get a taste of the Italian treasure.  In the spring, he plans to create a curbside café along the outside of the facility, further enhancing the ambience of Little Jimmie’s.  This building will also be an older facility, although with newly renovated interior.

He believes in the four g’s of being a restaurateur: great food, great flow, great feel and great service.  This new edition is sure to maintain the style those in Mt. Airy are used to and then some.

Sitting down with the restaurateur, he told me there are two kinds of restaurateurs: one who is focused on maintaining one restaurant and doesn’t want to take anymore risks, while the second is crazy, wanting to expand their business further.  Reed happily says he fits into the category of the crazy restaurateur, as he is no stranger to risks.  In the last few years, Reed has stumbled through rough partnerships and financial turbulence, but these were necessary lessons, as he regrouped and became stronger despite the difficulties.

Reed candidly explained that failure is not going to stop him on his journey.  He learned that partnership simply wasn’t the best way for him to do business, so he became his own partner, and is happier than ever with this decision.

The community of Mount Airy has embraced Jimmie Reed and all his business ventures, and therefore it is important for him to train local and stay in this community until he is ready to expand to other neighborhoods.  Some of the prospective areas he would like to see Little Jimmie’s brand would be West Oak Lane, Olney, and Wynnefield, targeting other middle class, diverse, progressive neighborhoods.  He believes that business excels quickly in Philadelphia, but his base will always be in Northwest Philadelphia.

Reed doesn’t mind sharing his knowledge, and encourages all to enter into his lovely shop and make themselves welcome.  If he can offer any advice to anyone aspiring to grow their own brand and small business, he is very much receptive to all questions.

He learned how to cultivate his business with the help of the community and city council.  He encourages the youth to have a simple vision and weigh the pros and cons of the ventures they want to take.  There are so many resources in the city for small business owners through the help of Mayor Nutter and City Council, and minorities should especially pull from these resources, as it is highly important for us to want to own and maintain our own businesses.

Reed would like to see more black people own their own businesses, stepping out and try new things.  Being one of the only black coffee roasters in Philadelphia, he is no stranger to stepping out on a limb.