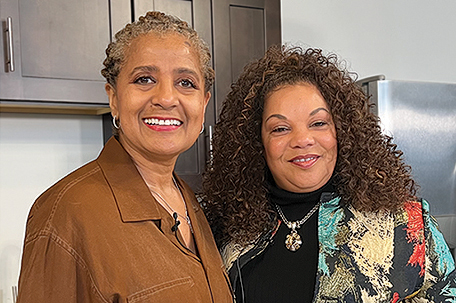 Launched in 1992, by the late Jerome (Jerry) Whyatt Mondesire, the Black-owned and operated Philadelphia Sunday SUN has been a mainstay community newspaper for residents of Mount Airy and surrounding neighborhoods throughout the city. The editorial concept for the publication has always been clear: If it has to do with the Philadelphia Black community, get the word out.

During her six-year-long leadership at the Philadelphia Sunday SUN, Catherine Hicks, the paper’s publisher, has continued the vision set forth by the SUN’s founder and her mentor: To be a platform of information and change. To do so, Ms. Hicks has been building even stronger community connections by expanding the paper’s footprint and content.

During her appearance on the Dishing with Patricia video podcast, scheduled to air on Wednesday, April 13, Hicks shares why community newspapers are important, as both information outlets and employment opportunities. She also explains how the SUN has taken steps to remain a current news resource, keeping pace through its digital news reporting strengths, its podcast offerings, and its thrice-weekly newsletter. In addition, the paper posts Dishing with Patricia’s plant-based recipes every Sunday, and sponsors featured programs, such as “Millennial Voice,” with host Danae Reid on Sundays, and the popular “Spotlight,” hosted by Kharisma McIlwaine, each Thursday. She also expressed a desire to see more women — particularly, African American women — represented in the media.

Elected in July 2021, Hicks also shares her feelings about being the first African-American female president of the Philadelphia branch of the NAACP, her aspirations for the ongoing success of the organization, the importance of volunteerism and how interested residents can join the branch.

Amidst the exchange, Hicks “dished” about her late mother’s cooking and how it has become a part of the tradition she uses to celebrate family. The highlight of the Dishing with Patricia episode occurs when she becomes the sous chef to the video podcast’s host, Patricia Marshall Harris, and assists in preparing a Vegan Vegetable Omelet, Roasted Mixed Potatoes, Butternut Squash and Sweet Potato Hash. It’s apparent that she found the plant-based meal a delicious alternative and a strong contender to more traditional breakfast options.

The Second Season of the “Dishing with Patricia” video podcast can be seen on: https://www.classie-essential-nutrition.com/dishing-with-patricia-podcast, and Youtube.

The second season of Dishing with Patricia