Dining among the flowers 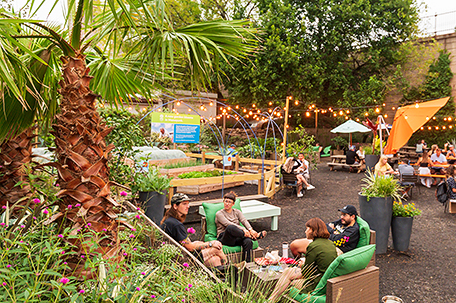 Last Saturday night, I got the chance to dine among the dahlias, the beard tongue, and the Bigleaf Magnolia at the Pennsylvania Horticultural Society’s Pop-Up restaurant in Manayunk.

The seasonal restaurants — there is also a pop-up on South Street — serve in part as a preview to the Philadelphia Flower Show, which begins on June 11 at FDR Park in South Philadelphia. With a theme of “In Full Bloom,” this year’s show promises to be one for the ages.

The Manayunk Pop-Up, which is located at 106 Jameson Ave, has some new features which include a game room that allows you to play a game of skee-ball, foosball, or pop-a-shot while you enjoy a cocktail or some munchies.

Speaking of the munchies, a significant chunk of this year’s pop-up menu consists of plant-based options. From vegan crab cakes to Impossible burgers to a chicken-fried mushroom sandwich, there’s plenty of options for those who don’t eat meat.

There’s also a tiki-themed drink menu that includes Bacardi Anejo rum, which is aged for 8 or 9 years, and a selection of beers for those who like beer.

SUN associate editor Amy V. Simmons joined me as we checked out some of the food and drinks offered at the pop-up. I started with the Green Goddess Chickpea Hummus, which included Everything Bagel spice, fresh cauliflower and broccoli, and crackers, a Bavarian pretzel with some of the best homemade mustard I’ve ever had, and the Caprese grilled cheese, with mozzarella cheese, sundried tomato spread and basil aioli.

Amy had a pretzel as well, some of the pop-up’s famous Sidewinder fries, and the Grilled Beyond Bratwurst, which included the homemade mustard, beer braised onions.

As for cocktails, I had the Tiki Old-Fashioned, which included aged rum and pineapple bitters, and Amy had the Island Daiquiri, which included Don Q Passion rum, Hawaiian Punch, passion fruit and lime.

The hummus was creamy and had chunks of chickpea in it. I don’t know what made it green, possibly avocado, but it was tasty. I would have loved to see some tortilla chips or even more crackers because good hummus needs something with a touch of salt. I also enjoyed the Caprese grilled cheese, especially the sundried tomato spread.

Amy pointed out that her Beyond bratwurst, while interesting, didn’t taste like actual bratwurst, but the folks who do vegan food will probably improve that someday. However, the fried onions and mustard were delicious.

We have to talk about that mustard. It was some of the best mustard both of us had either tasted. I’d order the Bavarian pretzel just for that!

And if you want to get your tickets for the PHS Philadelphia Flower Show, you can also pick them up at the pop-up’s bar. Tickets start at $50 for adults, $35 for Young Friends aged 18-29, and $25 for children.

For more information on the PHS Pop Up Gardens, visit:  www.PHSonline.org.