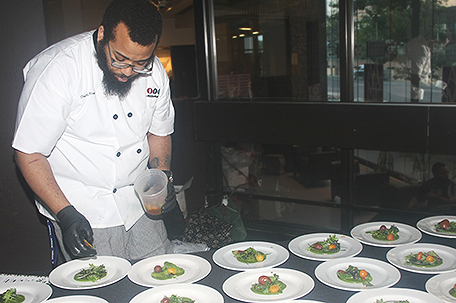 ABOVE PHOTO:  Chef Kurt Evans prepares the Tomato Salad which was the first course of the Art of the Flavor Dinner which was the signature event for the Black Restaurant Week. This was the first time Philadelphia offered Black Restaurant Week. The event is running through Sunday, June 17th. This dinner was held at the African American Museum of Philadelphia [AAMP] on Tuesday June 12th.  (Photo/Robert Mendelsohn)

Thanks to Black Restaurant Week, Philadelphians will have more options for that Father’s Day dinner.

Culinary magazines have had a lot to say over the years about Philadelphia’s restaurant scene and how dynamic it’s become.

This week, the spotlight is thrown on the city’s Black-owned restaurants during the first-ever Philadelphia Black Restaurant Week. During the week, people will be able to partake from prix-fixe menus featuring a variety of foods ranging from Asian fusion, to Ethiopian, to Caribbean and American Soul food. The week also included a variety of events ranging from a pop-up dinner featuring renowned local chef Kurt Evans to a bartending competition.

The first Black Restaurant Week was held in Houston in 2016 when founders Warren Lockett, Derek Robinson and Falayn Ferrell took at look at the culinary offerings being put out there by the city’s Black-owned restaurants, food trucks and catering halls, Ferrell said.

Over the last two years, the concept has spread across the nation, with Black Restaurant Weeks happening in Atlanta, Los Angeles, New Orleans and the San Francisco Bay Area (San Francisco and Oakland).

Philadelphia became one of the cities because it’s a place that knows good food, and shows love to those who produce it.

Ephream Amare Seyoum, manager of the Dahlak Paradise restaurant in West Philadelphia agreed. When his establishment was contacted to be a part of Black Restaurant Week, he jumped at the chance.

“We have seen an increase in traffic due to Black Restaurant Week,” he said. “Encouraging people to buy Black is a big part of our business.”

Unlike most of the Restaurant Weeks held here in Philadelphia, Black Restaurant Week is more than just a chance to spotlight the city’s best eating establishments. It’s also a benefit for F.A.R.M.S, (Family. Access. Resource. Management. Services), a non-profit that helps farmers from marginalized communities through expanding markets, education and relieving hunger in the communities served by these farmers.

While I wasn’t able to hit all of the restaurants participating in Black Restaurant Week, I was able to make it to two of them. So I have a couple of recommendations:

*If you can make it to the StarFusion restaurant at 2013 N. 63rd St., try the fried broccoli. Sure, putting “fried” and “broccoli” in the same concept might sound weird, but the crunchy, glazed morsels with sesame seeds will satisfy your need for both something fried and something healthy in the best way possible.

The turkey wings at Tasties Restaurant, located at 1211 N. 52nd St., also in West Philadelphia,  are smoky enough to stimulate the taste buds without being overpowering. They’re also seasoned so well that you don’t even need gravy.

If you’re going to take Dad out for that Father’s Day dinner and are looking for somewhere to go, go to www.phillybrw.com and check out the menus. Also look for hashtag #blackrestaurantweek on Twitter and Instagram.