Battle Of The Burger 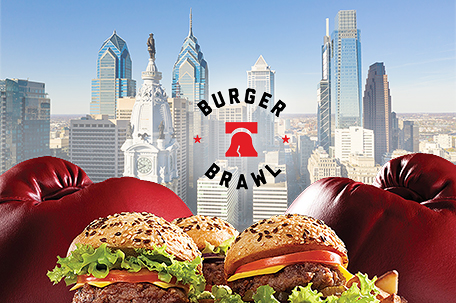 During the 9th Annual Philadelphia Burger Brawl, attendees were able to eat, drink, be merry, and raise money to help Philadelphia’s schools.

The Philadelphia Burger Brawl is the kind of event tailor made for someone like Yvette Redd of Wayne.

Standing in the middle of the Marine Parade Grounds of the Philadelphia Navy Yard with a sample of The Ultimate Breakfast Burger from the Steam Pub restaurant in Southampton, Redd, who was there with her friends Trinette Ricks of Willingboro, New Jersey and Austin Lindsay of Norristown, was enjoying this version of one of her favorite foods at an event that she’s usually unable to get to.

“I love burgers,” Redd said. “I eat them all the time. I can eat them five days a week.”

On Sunday, about 3,900 people came to the Navy Yard to sample the wares of 50 of the area’s best hamburger joints and restaurants as part of the Philadelphia Burger Brawl, presented by Jim Beam.

The event, which is in its ninth year, is an example of what happens when a motivated parent uses his or her talents in service of children.

When Rob Wasserman went to see his son’s elementary school, he and his wife, Maggie had concerns.

“We walked around and we went into the computer lab,” he said. “It wasn’t what the kids needed.”

So he decided to help the best way he knew how, which as the owner of the Rouge restaurant on Rittenhouse Square involved the culinary arts. So the Burger Brawl was created.

And $283,000 and nine years later, more than 50 restauranteurs gathered at the Navy Yard battling for the right to be able to say that they have the best burger in the city.

“In all honesty, I’m grateful for the donation of time and effort that these chefs are giving to support the community,” Wasserman said.

“This money will allow us to do more for the schools,” Frisby Greenwood said.

In addition to the burger competition, there was also a Cutthroat Cocktail competition in which many of the restaurants sent bartenders to compete for cash and prizes by creating cocktails using Jim Beam.

Here are this year’s winners:

More than 60 judges from the region selected the winners in this category:

Each attendee was given a black and white poker chip when they arrived at the Burger Brawl to vote for their favorite burger. Here are this year’s winners:

Chef Eric Paraskevas was floored by the win.

“I’ve been trying to get into this event for years,” he said. “I knew that they gave us a chance, we’d win!”

“Instagrammers Choice” is a new feature in the competition this year. These awards go to the burgers that when put on Instagram will make folks want to say, “I’ve gotta have one of those!”.