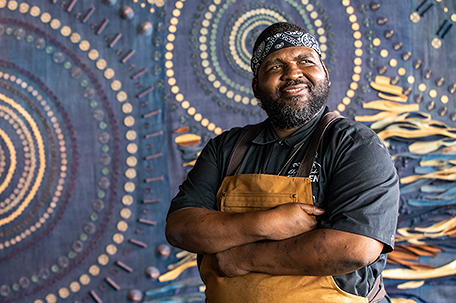 Garces’ Chefs in Residency Program has returned to support emerging chefs while celebrating the diversity of cooking styles and cuisines.

Season two of the program kicked off with Chef Ruben “Big Rube” Harley, head chef at the Chef Big Rube’s Kitchen at Pitchers Pub located on Main Street in Manayunk.

“After the successful debut season of the Chefs in Residency Program at Volvér, I’m so proud to be able to announce the second cohort has been selected,” Garces said. “We’re kicking this season off with Chef Reuben ‘Big Rube’ Harley, whose “Black Folks Style Cooking” has been making a big impact in the region. This, combined with his flair for fashion and design, made him an obvious choice to jump off this new season.”

One of the reasons he agreed to participate in this collaboration is because his relationship with Garces goes back to photographing Garces events, Harley said.

It also goes back to when they shared ghost kitchens next to each other in the Mantua section of West Philadelphia, he added.

“It is a chance to broaden my audience as much as possible giving folks authentic organic cultural cuisine,” Harley said. “I’m bringing the original cuisine of America — aka blackfolkstyle cooking — to the forefront. Most folks know it by soul food or Southern cooking. I never co-signed those, because like every ethnicity in the world, we call their cuisine by its name, and Southern and soul is a blank canvas, in my humble opinion. Plus, my grandma — aka Nan — always said ‘Black folk cooking,’ and that meant something to me.”

Harley became a well-known name in Philadelphia starting in the 2000s. He turned local company, Mitchell and Ness, into a household name with their fashionable vintage “throwback” sports jerseys.

He was also one of Philadelphia’s most well-known street photographers, whose Street Gazing photos ran in the Philadelphia Daily News from 2011 to 2017.

Harley further expanded his repertoire in 2013 when he started doing pop-ups at prominent restaurants in Philadelphia from Zavino with his ground turkey lasagna, to his signature fried chicken and waffles at Toast, Vesper and St. Benjamin’s Tap Room and more.

Harley also began winning competitions against seasoned chefs. His style of cooking reflects that of Southern Black folk flavors that fed plantations and Northeast estates passed down from his grandma.

For the last 10 years, he has been bringing a new audience to his culinary offerings that he was doing in the 90s selling his food to Philly’s hair salons and barbershops for their hungry patrons wearing the throwback jerseys before he made them part of his brand.

Through a special donation program in partnership with the Garces Foundation, each Chef in Residency will have the opportunity to raise money to support their work with their current restaurant, or to use for the start of their next culinary journey.

“We applaud Chef Jose Garces and look forward to seeing the celebrated Chef in Residency program continue to flourish in its second year,” said Matías Tarnopolsky, president and CEO of The Philadelphia Orchestra and Kimmel Center, Inc. “A new group of local culinary talents will be propelled into a greater public eye, while sharpening skills and sharing their cuisine with visitors to the Avenue of the Arts.”

Garces’ Chef in Residency will showcase their top signature dishes on the Volvér menu for six to eight weeks, alongside Chef Garces’ brand-new menu of Portuguese-inspired dishes.

“We are excited to launch our new menu at Volver this season,” said Garces. “The menu features Portuguese-inspired dishes that exemplify the foods bold and beautiful color. When developing this menu, we explored the beautiful cuisine of Portugal and the neighboring influences from Europe and the Mediterranean.”

For his charity, Harley will support Anderson Monarchs, a sports-based youth development organization based in South Philadelphia. Monarch’s programs have provided athletic and educational opportunities to thousands of underserved youth in Philadelphia.