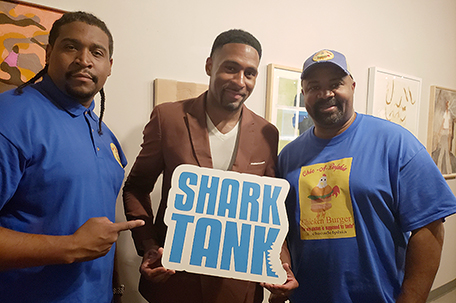 Sometimes you’re just craving a beef burger, but want a healthier version that doesn’t sacrifice the juicy, delicious taste. The turkey burger is often suggested as a healthy alternative for your greasy sandwich, but there are those that believe when trying to unseat the all-time favorite beef burger, the chicken burger deserves some consideration.

“Chicken burgers are a nice break from typical hamburgers and much healthier for you,” according to Anthony Roebuck, a principal of Chick-A-Delphia Chicken Burgers. They are flavorful, fairly simple to make, and quite delicious.  Roebuck and his partners Donald Stevenson and Myron Davis believes the Philadelphia-based company’s slogan says it all; “The way chicken is supposed to taste.”

It is on this premise that the partners are building their Chick-A-Delphia brand and product.

“Given the concerns for healthier eating alternatives, poultry has proven healthier than red meat in scientific studies,” noted Roebuck.

“Ground chicken can be your weapon to flavorful, yet lean burgers perfect for quick and easy weeknight dinners [or] leisurely weekend lunches. You can even go bun-less if you are charging full force on the healthy train. These are so good that you don’t even need a bun,” added Stevenson, who is the group’s marketing and consummate pitchman.

The group has secured the services of well-known Philadelphia executive chef Bernard Talley, who coordinates food tastings and demonstrations featuring the Chick-A-Delphia product.

“It’s not surprising that poultry has proven healthier than red meat. Poultry has better fats than red meats, and eating poultry hasn’t been linked to a higher risk of cancer, heart attack, stroke, or diabetes,” explained Talley. 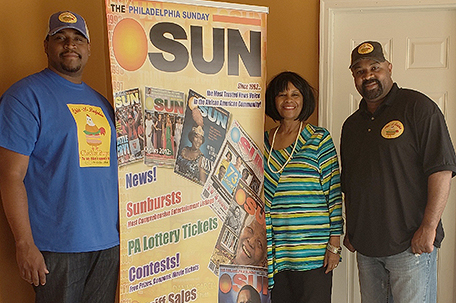 When comparing the formulation of burgers, Roebuck noted, “Almost any chicken or turkey burger is leaner than one made of “regular” (30 percent fat) ground beef.  Regular ground beef has 230 calories and 6 grams of saturated fat — almost a third of a day’s worth — in a 3 oz. cooked patty. Even so-called lean “10 percent fat” beef burgers have more saturated fat (4 grams) than the same size of a chicken or turkey burger (around 2 grams).”

For those who desire a more classic burger, Chef Bernard provided the following instructions: Brush the cut side of the buns lightly with oil and grill, cut-side down until light golden brown. Put a burger on the bottom of each bun and top with lettuce, tomato, onion, ketchup, mustard, pickles and bun top. Serve with sides from fries to chips.

There are hundreds of burger recipes with fresh ingredients that don’t skimp on flavors that you crave.

Chef Bernard opined that the chicken taste is better and healthier and makes a great gourmet burger. Chick-A-Delphia burgers represent an array of tastes that include jerk, Cajun, spinach, brocolli and shrimp flavors.

Chicken burgers, according to Stevenson, are also great for family outings.

“They are not heavy, they are flavorful and remain succulent after cooking,” he said.

Stevenson has spent the last year promoting Chick-A-Delphia, and in the process convinced his partners to enter their product in the “Shark Tank” program competition. The partners thought Stevenson was reaching a bit out of their league until he received an email inviting the company to a casting call in New York. The show’s producers saw over 250 entrepreneurs, all hoping to pitch their businesses and gain a spot on the actual television show.

Roebuck and Stevenson practiced their pitch for the judges, knowing that they beat out 4,000 competitors to make the pitch producer’s round. “We have our fingers crossed and are confident that our chicken burger will advance us to the next round,” said Stevenson.

When it comes to backyard burgers off the grill, we all want the same thing: a tender and juicy burger that we can really sink our teeth into. According to Chef Bernard Talley there are a hundred and one ways to grill a burger, but here’s a recipe, he says, that guarantees flavorful and juicy chicken burgers every time.

Heat the grill. Heat an outdoor grill to high heat (about 450°F), or until you can hold your hand an inch over the grates for only one second. On a charcoal grill, arrange the coals to create a high heat and a low heat cooking zone (direct and indirect grilling). Meanwhile, prepare the burger patties.

Season the ground chicken. Place the ground chicken on a baking sheet and gently pat it into a log about 2 feet long. Use your thumb to make a deep trough in the center. Sprinkle the onions evenly into the trough. Whisk the Worcestershire, tamari or soy sauce, and garlic powder together in a small bowl. Sprinkle this over the onions. Finish with a few grinds of fresh black pepper over everything. 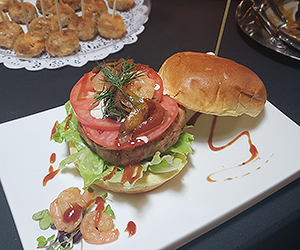 Shape the patties. Pinch the ground chicken closed around the onions. Divide the meat into 8 equal portions using a chef knife, a bench scraper, or your fingers. Use your hands to gently flatten each portion into a patty about 1-inch thick. Try not to compact or overwork the meat. Let the burgers sit at room temperature until the grill is ready, about 20 minutes.

Assemble the burgers: Place a patty on each toasted bun and serve with toppings.

Recipe Notes: Different flavorings: Instead of or in addition to the onions and Worcestershire sauce, try stuffing the burgers with things like fresh minced herbs, barbecue sauce, cubes of cheese, olives, sun-dried tomatoes, crispy bacon, mushrooms, and hot sauce.

Make ahead: The burger patties can be seasoned, shaped, and refrigerated for up to 1 day ahead before grilling. Let the patties sit at room temperature for 20 to 30 minutes before grilling to take the chill off.

Storage: Leftover cooked burger patties can be stored in an airtight container in the refrigerator for up to 3 days.

Grilling makes it easy to knock fat out of food