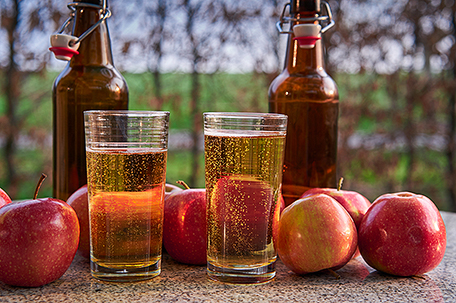 When cold weather arrives, hot chocolate, eggnog, and spiced tea are all the rage. Sometimes, however, you would like a seasonal alcoholic beverage — if only for the holidays.

Most holiday beverages can easily be spiked with spirits and liquors. People often forget that one of the best winter drinks is apple cider, which is made even better with the likes of bourbon, rum, and tequila, to name a few.

Here’s what apple cider isn’t: apple juice, or hard cider. There isn’t a defined legal standard on the difference between apple cider and apple juice, which is why many brands use the names interchangeably for marketing purposes.

To be clear, fresh apple cider is usually raw apple juice that hasn’t gone through a filtration system to remove the pulp and other sediment from the apple.

Apple cider can be unpasteurized, unlike apple juice, which is typically pasteurized to prevent fermentation and to prevent spoilage. Hard apple cider is a fermented alcoholic beverage.

When snuggling up on a cool autumn evening, here are a few of the best alcohols to pair with apple cider for wonderful seasonal drinks:

Apple Cider Sangria has just the right amount of alcohol, and it is super simple to put together, making it the perfect fall cocktail. Apples are seasonal and delicious, and they’re even better when soaked in the sangria for several hours. The color is golden and clear, and it’s lovely in the glass with ice cubes and fruit slices—but it’s also gorgeous in a punch bowl for a party. Best of all, this gets better the longer it sits, since it gives the fruit and booze more time to intermingle. This Apple Cider Sangria is even classy enough to serve for Thanksgiving with appetizers or afternoon snacks before the big meal.

4 cups apple cider (such as Martinelli’s)

2 medium (about 7 oz. each) bartlett pears, cored and cut into 1-in. chunks

How to make it:

Stir together cider, brandy, liqueur, apples, oranges, pears, pomegranate arils, and cinnamon sticks in a 4-quart container or punch bowl. Gently stir in Prosecco. Chill at least 1 hour or up to 8 hours or overnight. Serve chilled sangria over ice with plenty of fruit in each glass.

An Apple Cider Margarita is the perfect, easy-to-shake-up cocktail for your next fall happy hour or holiday party. Serve it on special occasions (this drink was practically made for Thanksgiving) or cozy fall nights in. This autumnal twist on a summer favorite is easy to make as it is to drink (seriously, it’s stronger than it tastes—don’t say we didn’t warn you). Instead of salt, we’ve rimmed this margarita glass with cinnamon sugar.

This simple recipe serves two and comes together in just five minutes. But, if you’re planning to serve a crowd, you can easily adapt the recipe to accommodate more people. Just mix it up in a punch bowl instead of a cocktail shaker!

Cold weather can’t keep fruit off the menu with these fun, healthy tips

Let us count the benefits of apple cider vinegar