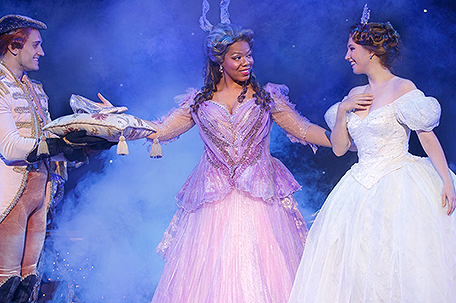 Most of us are familiar with the story of Cinderella, the beautiful orphan with a heart of gold. She sings beautifully, communicates with animals, and maintains an otherworldly amount of kindness and optimism despite the constant berating of her evil stepmother and step-sisters. We’ve seen several versions of this story, but Rodgers and Hammerstein’s take remains a classic. The Tony award-winning musical possesses all of the elements we know and love; an unlikely love story, stellar soundtrack, dynamic choreography, magic, a fairy godmother and a handsome prince.

“Cinderella” is currently on a national tour, stopping in Philadelphia for one weekend only. Zina Ellis, who stars as Marie, makes her national debut in the show. Ellis sat down with the SUN to talk about her experience with the show.

Originally from Chicago, Ellis discovered her love for musical theater between her middle and high school years. She discovered that she wanted to pursue her passion shortly thereafter.

After pursuing her passion further while attending Yale, Ellis went on to land multiple roles including; Rona Lisa Peretti in “Spelling Bee”, Claire in “Ordinary Days” and Phoebe Meryll in “The Yeomen of the Guard”. She spoke about embarking on her first national tour.

“It’s very exciting… it’s a wild ride! Everyone is really fun and nice. I would be very happy to tour again if every cast and crew member is as wonderful as this group,” Ellis remarked.

One of the most iconic versions of  “Cinderella” was Rodgers and Hammerstein’s 1997 made for TV movie, starring Brandy and the late, great Whitney Houston. It was the first time audiences got the see an African-American Cinderella. Ellis shared some of what audiences can expect with this version.

“This particular version that we have on the road, is very similar to the Brandy version of the show, but it does have some changes,” she said. “The Brandy version is a TV movie around 90 minutes, and ours is a full two-hour show. So the writers went back to the original Charles Perrault fairytale and found different ways to flesh out the characters, which I really enjoy. I grew up watching the Brandy version of it, and it makes my heart very happy to work on something so close to it. The music is incredible. I love “Impossible/It’s Possible”! It’s such a blast, and you can feel so much energy coming off the audience. The magic really starts to pick up in that number. It’s sort of a reveal, after reveal, after reveal, which is really fun.”

Ellis also expressed her joy in playing the character Marie.

“Marie is this kind of beggar woman in the town,” she said. “I call her a forest lady, because she lives in the forest and everyone think[s] she’s crazy. She’s good friends with Cinderella and has been for a long time. Marie is the type of person people tend to ignore… which means she’s kind of able to watch, observe and notice things. When she sees the Prince, she sees a real opportunity for Cinderella and for the whole kingdom to make some exciting positive changes. I think Marie sort of orchestrates the whole story and decides to reveal her true magical self once she sees that the time is right.”

After hearing all about Ellis’ wonderful adventure with the show, she expressed her hopes for the audience.

“I hope that people leave the show feeling encouraged, uplifted and excited to go on about their days and lives,” she said. “It’s very fun to work on something that really makes people happy and makes them smile. I feel very lucky to be able to do that, and I think probably most people will be leaving the theater smiling.”

To follow and support Zina Ellis on her journey, visit her website at: www.zinaellis.com and follow her on Instagram at: @abitoverzellis. The magic of Rodgers and Hammerstein’s “Cinderella” will be at The Academy Of Music from February 22 through February 24. Visit www.kimmelcenter.org for more details on tickets and showtimes.