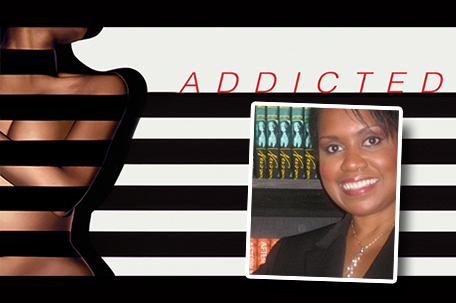 Roberta Jamison was always an avid reader, the kind who would sneak and read books under the blankets when she was supposed to be sleeping, and bump into things while walking down the street because her nose was buried in a book.

Romance books were her favorites, but as she got older she got into erotica. The more passionate – the more sex – the better, the now 43-year-old dental assistant said.

Over the years, Zane, a mother of three, has heard from a lot of people like Jamison, and says she’s grateful that she’s able to make feel women comfortable about their sexuality.

“It’s always been acceptable for men to crave for sex whether they’re in a relationship or not. Men will even go pay for it. My books have made them realize that it’s alright for them to be sexual, too. There’s nothing wrong with them wanting sex just like men do.”

Unlike most self-published authors at the time, she had not tried to get into a major publishing house, convinced that they were not looking for her kind of writing, but after the underground success of The Sex Chronicles, and encouragement from established writers like New York Times best selling author Eric Jerome Dickey, she decided to take a chance. In 2000 she signed with Dickey’s literary agent Sara Camilli, and a year later Atria, an imprint of Simon & Schuster, published Addicted.

The literary industry has not been the same since.

“There wasn’t a lot of black erotica out back then, so black women went crazy picking up her books,” explained Hakim Hopkins, owner of the popular Black and Nobel Books, located at Broad Street and Erie Avenue. “Because of her, there, there’s now a huge amount of black erotica on the market.”

Zane broke the ice for authors like Allison Hobbs, Mary Morrison, Shay, and Noire, Hopkins said. “But Zane is still the queen of black erotica. She’s such a great storyteller that if you didn’t like erotica, you’d like her books.”

Zane has written more that 15 books, Nervous, Shame on it All, Gettin’ Buck Wild, The Heat Seekers, The Sisters of APF, Skyscraper, Afterburn, and Love is Never Painless, and has appeared on the New York Times Best Seller’s list numerous times. Zane’s newest book, The Other Side of the Pillow, was published by Simon & Schuster in August. A play based on the book will open in Dallas this month.

But it’s Addicted for which is she probably best known.

The story, which was just released as a movie by Lionsgate, is about African American businesswoman, Zoe Reynard, who is so addicted to sex that she puts her life in danger.

The movie debuted on 846 screens, last Friday (Oct. 10) and earned $7.6 million – the 7th overall earner that weekend. But what’s impressive is, according to Moviephone, the film boasted a per screen average of almost $9,000, the best of any wide-release movie that weekend, beating out highly publicized, high budget movies, Gone Girl, and Dracula Untold.

The movies’ success likely contributed to Addicted to once again appearing on the New York Times best seller’s list for the week ending Oct. 16th.

Zane’s success comes as no surprise to her literary agent, Sara Camilli. “One of the things that originally drew me to her was that she’s a good storyteller. Her characters portray scenes and situations that other author often shy away from. And she weaves those scenes into page-turning stories.”

Tamara Graham was at lunch with a friend in 2008, and was slightly annoyed that all she wanted to talk about was a Zane book that she was reading, Shame On It All.

“This chick couldn’t stop reading the book at the table. I was like, ‘come on.’ Finally, I figured I’d give a try,” said Graham, 42, owner of Free To Roam, a travel agency. “I thought it would be over sexual, but it wasn’t. And it was very much a page-turner.”

East Oak lane resident, Shantay Morman, agrees. “A lot of people, when they think of Zane’s books, they think it’s about sex. But I tell them no, they have a plot. I love that she gives backgrounds on all of her characters, so you feel you know them. And so when she writes about someone who is a nymphomaniac, you understand why she is what she is.”

Morman, 26, a correctional officer at Philadelphia’s House of Correction said that one of the things she loves most about Zane’s novels is that the characters are relatable: “And her scenes are so realistic women can’t help but relate to her books. Like in her new book, there’s a part where a woman’s best friend gets jealous and sleeps with the woman’s boyfriend in order to break them up. Oh my God, I know people who have gone through that.”

Stephanie Cornish, a benefits analyst for an insurance company, was 16 when she read her first Zane book, Addicted. She too, says it’s the way that Zane’s characters are written that attracts her to the books. “The way she writes about them, it’s like she’s writing about regular everyday women who get into different – but believable – sexual situations.”

Both Cornish and Morman were teenagers when they first started reading Zane novels, and though many people may think that may be young for women to read erotica, the age rang! of her readers seem to run the gamut.

“I have young adults who come in for Zane novels, but I also a group of women in their fifties and sixties who faithfully read her,” said Marvin Debose, a librarian at the Overbrook Park branch of The Philadelphia Library who says Zane’s book fly off the shelves. “I’m a man, so they don’t discuss the book with me, but they give me a smirk. I can tell they enjoy those books.”