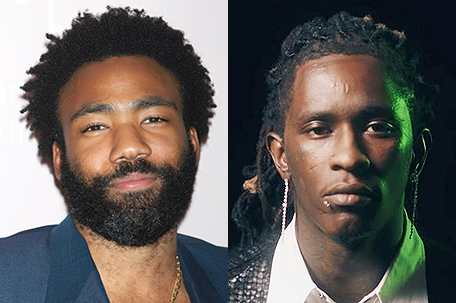 NEW YORK — Young Thug, a co-writer of “This Is America,” made history alongside Childish Gambino when the social-political hit became the first hip-hop track to win the song of the year Grammy, but Young Thug almost didn’t make the history books.

When the Recording Academy first announced the nominees for its 2019 show last December, Young Thug was not listed as a co-writer of “This Is America” along with Gambino and Ludwig Goransson.

His name, however, was later added to the song’s credits. It wasn’t clear if his name appeared on the ballot during the final-round voting period, which took place between Dec. 13, 2018 and Jan. 9, 2019.

Young Thug, born Jeffery Lamar Williams, is one of many rappers whose vocals are heard in the background of “This is America” — the track also includes 21 Savage, Quavo, BlocBoy JB and Slim Jxmmi of the duo Rae Sremmurd.

The song of the year Grammy is only awarded to the writers of a song; artists only win if they have writing credit on the track.

“This is America” also became the first rap song to win record of the year, an honor awarded to the performing artists, producers and engineers of a song. Like Young Thug, Shaan Singh was not originally listed an engineer/mixer on the song but was later added on.

In addition to Gambino, record of the year was also awarded to co-producer Goransson, mastering engineer Mike Bozzi and engineers/mixers Derek “MixedByAli” Ali and Riley Mackin.

Gambino, also known outside of rap as Donald Glover, didn’t attend Sunday’s Grammys, where he was tied for most wins (4) along with country singer Kacey Musgraves. “This Is America” also won best rap/sung performance and best music video.

Goransson, who has collaborated closely with Gambino since they both worked on the TV series “Community,” also won the best score soundtrack for visual media Grammy for “Black Panther.” Goransson also earned an Oscar nomination for best original score for “Black Panther.”