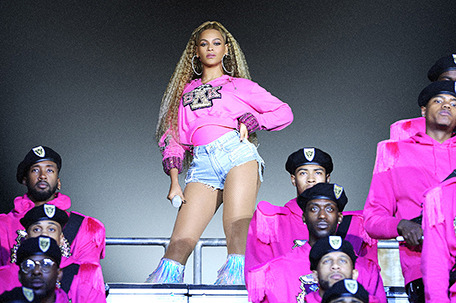 ABOVE PHOTO: This image released by Netflix shows Beyonce in a scene from her documentary “Homecoming: A Film by Beyoncé.” (Parkwood Entertainment/Netflix via AP)

In 2013, Beyoncé changed the trajectory of the music industry when she bestowed on us her self-titled album sans promotion. She did it again in 2016 with “Lemonade,” and she’s done it yet again with the surprise release of “Homecoming,” a Netflix documentary and live album that gives us a front row seat to a monumental, cultural, and career defining moment in the megastar’s 22-year career, Bey-chella (sin. Coachella).

The release of  “Homecoming” nearly falls on the one-year anniversary of the two-weekend spanning Coachella performance that has changed music festivals indefinitely. Traversing two hours, the documentary is a synthesis of iconic rump shakers, beautiful ballads, rehearsal footage, personal recounts, Black excellence, and more. And whether you’ve seen the performance before, listened to her chart-topping hits from afar, or both, “Homecoming” bequeaths yet another reintroduction to the Queen.

The dutiful and seamless mashup of the performances from both weekends remind us that her work ethic and precision are undeniable, as evidenced in the first few moments of the documentary.

Over the years, Beyoncé has received criticism for her exceedingly cloistered lifestyle, but her newest project is profoundly personal and subtly humanizes her. She gives us a glimpse into the life of a mother, a wife, and a friend, who also happens to be the greatest entertainer living, and arguably of all time.

And, while Beyoncé doesn’t grace us with any in-depth interviews during the documentary, she does weave her thoughts of the process throughout. We learn about the complications she suffered during her pregnancy with Rumi and Sir, the rigorous undertaking it took to lose the baby weight, the long and sometimes frustrating hours of performance perfecting, and the fact that she would’ve attended an HBCU had it not been for Destiny’s Child.

Aside from the specifics, Beyoncé also includes profound life lessons through quotes from some of the most famous Black cultural icons of all time, including, but not limited to: Toni Morrison, W.E.B DuBois, Nina Simone, and Audre Lorde.

The aforementioned is what makes the documentary/performance paramount. For those who don’t know, Coachella is notorious for being a predominantly White festival filled with flower crowns, body glitter, and is a chockablock of culture pilferers.

However, in 2018, Beyoncé introduced/reintroduced all of us to the beauty that is negritude. As the first Black woman to ever headline Coachella, she triumphantly uses her platform to normalize and promote Blackness in White spaces and also highlights the beauty and cultural significance of the HBCU experience.

Her crew, filled with approximately 200 talented dancers, singers, band members, steppers, and so on, were of all different shades, body types, origins, and more, reassuring us that we are a beautifully diverse people and are more than capable of anything. We’re literally immersed in the HBCU experience. Because of this, you never want to look away from the screen, fearing that you may miss even the most significantly insignificant fraction of “Homecomings’” run-time.

Aside from her artistic virtuoso, what I love most about Beyoncé that was reaffirmed by “Homecoming” in its entirety, is that she never makes me want to be her, but she inspires me to grind towards my fullest potential so that I can reach my respective pinnacles in a similar fashion. We’re reminded that anything we commit to should be done in its entirety and that mediocrity will never yield greatness.

Beyoncé is a plethora of things, including her role as a business woman. Sources say that she acquired $8 million dollars for performing both weekends, but according to multiple media outlets, she has managed to turn that $8 million into a $60-million-dollar deal with Netflix.