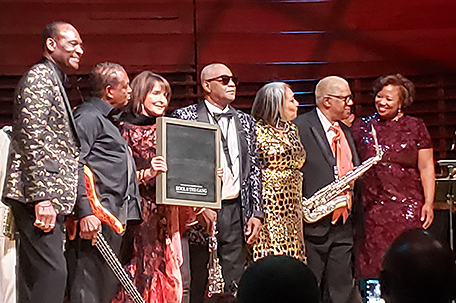 Tuesday night’s Marian Anderson Awards concert honoring Kool and the Gang was a celebration in the truest sense of the word.

ABOVE PHOTO: Marian Anderson Award goes to the members of Kool and the Gang.   (Photo: Leona G. Dixon)

For most folks, a 50th anniversary party is a nice gathering at a banquet hall with family and friends all around.

But for Kool and the Gang, the recipients of this year’s Marian Anderson Award, their 50th anniversary party was a star-studded affair that celebrated the group’s longevity, its humanitarian work, and its string of iconic hits including “Jungle Fever,” “Ladies’ Night,” “Open Sesame” and that favorite of parties and sporting events everywhere, “Celebration.”

The group’s combination of musicianship and humanitarian work, work that includes a performance on the Live Aid famine relief record “Do They Know It’s Christmas?” embodies Anderson’s ethos, an ethos in which music combined with mission, said Dyana Williams, Radio One host and member of the Marian Anderson Award board.

“In the entertainment business, 50 years together doesn’t happen,” Williams said, “but it’s happened with this group. Much like Marian Anderson herself, Kool and the Gang have been goodwill ambassadors and have used their platform to improve the lives of others.”

For those wanting something closer to the classical music performed by Anderson during a legendary career that included an iconic performance before an integrated audience at the Lincoln Memorial in 1939, Valerie Gay and the Ever Ensemble —- harpist Brandee Younger, flautist/vocalist Ruth Naomi Floyd, and bassist Noriko Ueda —- gave a presentation that brought music to the struggle of Blacks in America.

As they came to get their award, the members of Kool and the Gang in attendance —- George Brown, Robert “Kool” Bell, Dennis Thomas and Ronald Bell —- reminisced about their days performing at the Uptown Theater and how much love their funky R&B sounds got from music loving Philadelphians.

“Philly knows how to get down,” Robert Bell said. “We’re proud to receive this award from our Philadelphia family.”

The band them joined Jolly’s house band and the rest of the evening’s performers for a rendition of “Celebration,” which was a perfect way to end the show, Ronald Bell said.

“Marian Anderson is a celebration,” he said.