X-Men: Days of Future Past Wolverine– travels back in time in latest for the sake of the future 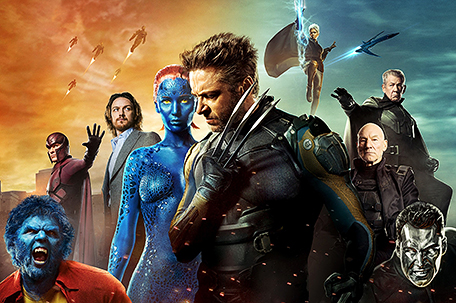 X-Men: Days of Future Past represents the 7th episode in the storied mutant series, and is the third directed by Bryan Singer who also helmed X-Men 1 and 2. This installment is loosely based on the 1981 Marvel Comics (issues #141-142) of the same name, a convoluted tale in which one of the superheroes is sent back in time to prevent an impending disaster threatening the present.

The story unfolds in a dystopian future where we find a race of robots called Sentinels slaying mutants and subjugating humanity. X-Men founder/leader/brain of the operation Dr. Charles Xavier (Patrick Stewart) summons his surviving protégés to a meeting in a monastery in China to hatch a plan to preserve the planet.

With the help of “phasing” Shadowcat’s (Ellen Page) quantum tunneling ability, Wolverine (Hugh Jackman) slips through a portal to a parallel universe in 1973. His mission there is to stop fellow mutant Mystique (Jennifer Lawrence) from murdering Trask (Peter Dinklage), the diabolical genius who invented the Sentinels.

Why would you want a vanquished villain to be reincarnated? Don’t ask. After all, that’s one of the easier leaps of faith this flick’s farfetched plot expects you to make. If you need a plausible plot, then you might be too close-minded for this imaginative sci-fi.

Try on for size the novel notion that President John F. Kennedy was killed “because he was one of us.” OK, let’s see, so JFK was assassinated for being a mutant? Why not? Just a couple of years ago we learned from another movie that Abraham Lincoln was a vampire slayer. Revisionist history? Or little known fact? You be the judge. What’s next, Dwight Eisenhower as an alien?

But I digress. Fortunately, X-Men 7 audience members will be very richly rewarded for taking flights of fancy, provided they succeed in suspending their disbelief. Don’t try to make sense, for instance, about how you go back in time, reverse a long-deceased person’s demise, and not simultaneously unravel myriad aspects of reality which have already subsequently transpired.

Instead, simply sit back and enjoy a sophisticated period piece unfolding against a nostalgic backdrop littered with staples of the Seventies ranging from lava lamps to waterbeds. This adventure even brings out of mothballs a number of favorite characters we haven’t seen in awhile, such as Storm (Halle Berry), Rogue (Anna Paquin), Cyclops (James Marsden), Iceman (Shawn Ashmore) and Colossus (Daniel Cudmore).

Don’t forget to sit through all of the credits for a decent-length teaser about X-Men 8: Apocalypse, coming to theaters in May of 2016. X-Men, a fabled franchise that like a fine wine, just keeps improving with age.

In English, French and Vietnamese with subtitles

To see a trailer for X-Men: Days of Future Past, visit:  https://www.youtube.com/watch?v=gsjtg7m1MMM

Bring your favorite coffee drink along on your summer travels