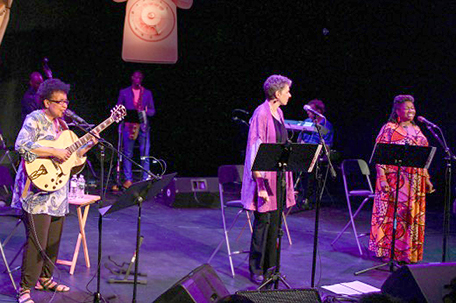 Poetry, songs, stories and jazz captures relationships before the internet.

Just in time for Valentine’s Day, World Café Live presents RetroLove, an all-original evening of poetry, songs, stories and jazz that capture sweet and sexy reminiscences of relationships before the Internet. The show is Sunday, February 12th at 5pm Downstairs at World Café Live Philadelphia at 3025 Walnut Street, Philadelphia. Doors open at 4:00. Show at 5:00.  Tickets are $20 in advance (plus fees) and $25 Day of Show.  Tickets can be bought at the World Café Live Box Office or here.

Back in Philadelphia by popular demand, RetroLove was conceived and written by poet and performer Beth Feldman Brandt — with music direction and compositions by Philadelphia’s first lady of jazz guitar, Monnette Sudler — and Barrymore Award-winning  singer and actress,  Joilet Harris. RetroLove was originally commissioned by Philadelphia Jazz Project and played to sold out houses in June, 2016.

In addition to poetry by Brandt and songs by Monnette Sudler among others, RetroLove includes relationship stories collected through dozens of relationship “Mad Libs”.  The result is an evening that Jen Childs, producing artistic director of Philadelphia’s 1812 Productions said was, “An amazing and inspiring evening in the theater.  The flow was seamless, it was funny and moving and different than anything I’d ever seen.”

Acclaimed poet Nikki Giovanni said about RetroLove, “Wow! What a way to look at … no … feel love. It’s always spring somewhere.  Breathe … embrace … love.” RetroLove will take you back in time, just in time for Valentine’s Day.

Poet Beth Feldman Brandt, whose book of poems, “RetroLove” inspired the show, said, “People immediately connect to this material and particular moments that take them back in time to when you needed to be more patient with love. It seemed natural to incorporate other Philadelphia RetroLove stories into the show. I was blessed to also connect with Monnette and Joilet, two icons of Philadelphia music and theatre, who round out the evening with music and song.”

Beth Feldman Brandt is a poet whose writing has investigated such diverse themes as old maps, herbal remedies and, now, explaining answering machines to her children.  She is the author of “Sage” and “Solace”, both collaborations with visual artist Claire Owen. Her song cycle, “Wind Rose”, is being set to music by Philadelphia composer Andrew Litts.  She is the executive director of the Stockton Rush Bartol Foundation that supports arts and cultural programs in Philadelphia, and is Chair of the Poet Laureate Committee for the City of Philadelphia. Beth is a five-time artist-in-residence at the Ragdale Foundation where much of her work was created. (www.brandtwords.com)

Grammy nominated composer/jazz guitarist/vocalist/bandleader Monnette Sudler is known as the “First Lady of Jazz Guitar.” Founder of the Monnette Sudler’s Philadelphia Guitar Summit, Sudler brings national and international master guitarists to Philadelphia/ Montgomery County stages “fusing guitars one string at a time.” She is the recipient of the Leeway Transformation Award, Art and Change, awards from the American Composers Forum, and the 2012 and 2013 Clef Club “Guitarist of the Year” awards.

Joilet Harris is a Philadelphia treasure. Her searing portrait of Lena Younger in the Arden Theater’s production of A Raisin in the Sun and her Barrymore award-winning turn as Caroline Thibodeaux in Caroline, or Change are a few career highlights. Throughout her 30-year career, Joilet consistently proves that she is a powerful and dynamic presence on stage as well as on television, with roles on “The Wire,” “Do No Harm” and “Law & Order: SVU.” Joilet has also toured the world as a vocalist, most recently playing Ella Fitzgerald in “Ella, The Ella Fitzgerald Story.”