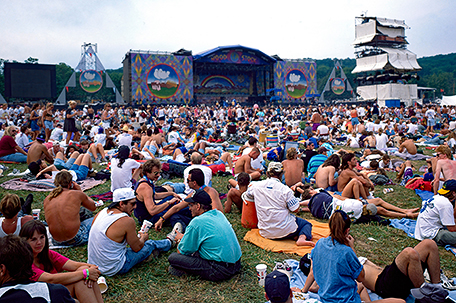 NEW YORK — It was the weekend that shaped the image of a “Woodstock Generation.” And that image would echo, appeal and provoke for generations to come.

To many who went or wished they did, the pivotal festival of “peace and music” 50 years ago remains an inspiring moment of counterculture community and youthful freethinking.

“We went for the music and found something so much more, and so much more important — camaraderie,” says Karen Breda, who was 17 when she went to Woodstock. She recalls feeling part of “a generation that felt like nothing could stop us. Peace. Love. The whole thing.”

Some other Americans saw Woodstock as an outrageous display of indulgence and insouciance in a time of war. And some didn’t look to Woodstock to celebrate their own sense of music and identity.

“There was no one baby boomer generation. There was no one approach to what Woodstock meant,” says David Farber, a University of Kansas professor of American history. But Woodstock became an “aspirational vision of what countercultural youth thought they could achieve in the United States.”

Breda didn’t go to Woodstock looking for a societal vision. She was fresh out of high school and liked rock concerts, and the three-day lineup was packed with acts including The Who, Jimi Hendrix, Jefferson Airplane and Crosby, Stills, Nash & Young.

After lying to her parents about her destination, Breda arrived from Boston to find a mind-boggling mass of people, tents, blankets, pot smoke, patchouli and underpreparedness.

Organizers had sold 186,000 tickets; ultimately an estimated 400,000 people showed up for the festival on farmland in Bethel, New York, about 80 miles (130 kilometers) northwest of New York City.

Space, water and toilets were in short supply. Security was thin. Rain and mud abounded. Breda and her friends slept in their car after getting separated from another vehicle carrying their camping supplies. It was a trek to get near the stage.

But what she remembers most was happening in the crowd — concertgoers meeting each other, sharing what they had, playing guitars together.

At a time of bitter protests over the Vietnam War, Woodstock “seemed to transcend the anger that clearly a lot of people were feeling. It was about being together. It was about helping out someone that needed something,” says Breda, now a nursing professor at the University of Hartford in Connecticut. “The music spoke for us.”

Concertgoers weren’t the only ones struck by the fellow-feeling and calm in the crowd — despite scores of drug arrests, medical problems ranging from cut-up bare feet to LSD freakouts, and two deaths, one from a heroin overdose and another when a teen was run over, according to The Associated Press’ reporting from the time.

There were no reports of violence, and a local police chief called the crowd “the most courteous, considerate and well-behaved group of kids” he’d encountered in his career. Max Yasgur, the dairy farmer who leased his land to the festival, said meeting them “forced me to open my eyes.”

He added: “I think America has to take notice.”

It did. Often with scorn.

Many Americans saw Woodstock as a spectacle of spaced-out, skinny-dipping, promiscuous hippies cavorting in squalor — with “little more sanity than the impulses that drive the lemmings to march to their deaths in the sea,” as a New York Times editorial put it (while allowing that “the freakish-looking intruders behaved astonishingly well”).

And for some, Woodstock would serve as an enduring symbol of the divides of the Vietnam War — on one side a throng of young people gathered for “peace and music,” on the other more than a half-million of their peers fighting in Vietnam.

“I’m sure it was a cultural and pharmaceutical event. I was tied up at the time,” the late Sen. John McCain famously said in 2007.

His remark — an allusion to his 5 1/2 years as a prisoner of war in North Vietnam — got a standing ovation from a Republican presidential primary debate audience. The former Navy pilot would later earn the nomination.

Two years later, the Veterans of Foreign Wars’ magazine marked Woodstock’s 40th anniversary with a cover story spotlighting some 109 service members who died in Vietnam during the festival and “are never lauded by the illustrious spokesmen for the ‘Sixties Generation.’”

The Woodstock audience did include at least one Vietnam veteran, snapped in a well-known photo . Performers included Country Joe McDonald, a Navy veteran who served mainly in Japan. His anti-war “I Feel Like I’m Fixin’ To Die Rag” became a memorable Woodstock moment.

“Some people alluded to peace and stuff, but I was talking about Vietnam,” McDonald said in a phone interview.

The song’s profane introductory cheer “is an expression of our anger and frustration over the Vietnam War, which was killing us, literally killing us,” said the singer, who helped spearhead the creation of Vietnam veterans’ memorial in Berkeley, California, in the 1990s.

On the same day his band, Country Joe & the Fish, played at Woodstock, another audience of thousands was in a Harlem park for a concert with its own sense of community and yearnings to challenge the status quo. Headliner Nina Simone delivered a set infused with songs of black empowerment and a militant poem that asked black people “are you ready” to instigate social change.

The show was part of the Harlem Cultural Festival, a concert series that would later be dubbed a “Black Woodstock.”

Over six summer Sundays, an estimated 300,000 people in total gathered to see acts including Stevie Wonder, Gladys Knight & the Pips and — like the upstate Woodstock crowd — Sly and the Family Stone.

“It was like a mini-Woodstock to a lot of people,” says Ethel Beatty Barnes, who saw the Sly and the Family Stone concert that July, when she was an 18-year-old New Yorker.

Her mother wouldn’t let her go to Woodstock. But Beatty Barnes feels the city-sponsored Harlem festival, which was showcased in two network TV specials, showed people didn’t have to go far to come together around music.

“It was embarking onto ‘what do we have already here where we can have people gather?’” says Beatty Barnes, who became a Broadway actress and singer. “It was a really great thing.”

A half-century later, the Harlem Cultural Festival’s anniversary is being marked with events including a concert in the same park, hosted by rapper and activist Talib Kweli. It’s part of Future X Sounds, a socially conscious concert series.

Meanwhile, four days of concerts and events are planned at the Woodstock site, now the Bethel Woods Center for the Arts.

The lineup includes 1969 performers Santana and John Fogerty, but the arts center has made clear it isn’t hosting a freewheeling festival: Spectators will need tickets and checkpoint travel passes to get to the site. Plans for a sprawling commemorative Woodstock 50 event elsewhere collapsed amid permitting and other problems .

Thinking back, Breda rues that “subsequent generations didn’t have the opportunity to experience something that I consider to have been so beautiful.”

But, she says: “It feels like something that could never happen again.”