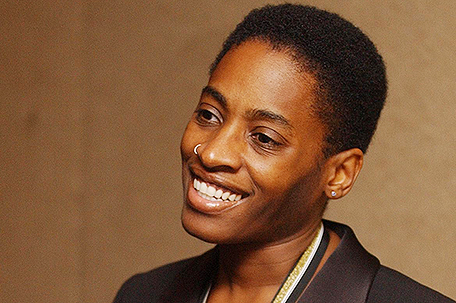 ABOVE PHOTO:  Jacqueline Woodson, a nominee for the National Book Award for young people’s literature, poses for photographers before the ceremony in New York Wednesday, Nov. 20, 2002. Woodson is the author of “Hush.” (AP Photo/Mark Lennihan)

NEW YORK — Jacqueline Woodson, the country’s next National Ambassador for Young People’s Literature, originally had someone else in mind for the job.

“It’s funny, because I called him (current ambassador Gene Luen Yang) awhile back to suggest another person,” the award-winning author told The Associated Press during a recent telephone interview. “And he told me, ‘Thanks, we already have a person we want.’ I had no idea it was me.”

The Library of Congress, which along with the Children’s Book Council and Every Child a Reader announced Woodson’s appointment Thursday, will hold a formal ceremony next week to begin her two-year term. One of the country’s most acclaimed writers for young people, Woodson won the National Book Award in 2014 for the memoir-in-verse “Brown Girl Dreaming” and is also known for novels such as “Feathers” and “Another Brooklyn.” She has previously served as “young people’s poet laureate,” an advisory position for the Poetry Foundation.

“We are delighted that Jacqueline Woodson has agreed to be the new National Ambassador for Young People’s Literature,” Librarian of Congress Carla Hayden said in a statement. “I have admired Jacqueline Woodson’s work for years, especially her dedication to children and young-adult literature. The Library of Congress looks forward to Jacqueline’s tenure of encouraging young readers to embrace reading as a means to improve the world.”

The ambassador position was established in 2008 with a mission to raise “national awareness of the importance of young people’s literature as it relates to lifelong literacy, education and the development and betterment of the lives of young people.” Previous ambassadors also include Jon Scieszka, Walter Dean Myers, Katherine Paterson and Kate DiCamillo.

Woodson has developed a platform called “READING = HOPE x CHANGE (What’s Your Equation?).” According to the Library of Congress, the idea is to encourage “young people to think about — and beyond — the moment they’re living in, the power they possess, and the impact reading can have on showing them ways in which they can create the hope and the change they want to see in the world.”

A prolific writer who has three upcoming books in various stages of completion, the 54-year-old Woodson says she is feeling excitement and “some trepidation” about her new job. “I love my solitude,” she says, “just having the time to create stories.” But she also welcomed a rare opportunity to reach young people in a direct and personal way, and to express opinions openly, to “be didactic.” A resident of Brooklyn, she hopes to visit rural communities and prisons, places where her books may not be available. She already is planning to attend an event at the Legacy Museum & National Memorial for Peace and Justice, which opens this spring in Montgomery, Alabama.

“I think I’ll be eating, sleeping and dreaming literacy and literature for the next two years and how to make an impact,” she says. “We’re at such a crucial time in our history and we need to have the conversations that literature allows us to have. I feel like I’m stepping outside of myself a little as a writer. Writing had always been about trying to change the narrative through literature. And here I’m trying to do it through talking, having conversations, and not through my characters.”