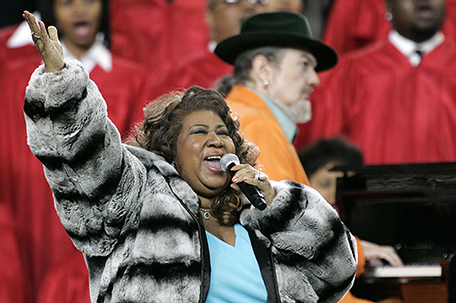 SENECA FALLS, N.Y.  — “Queen of Soul” Aretha Franklin and Nobel laureate and “Beloved” author Toni Morrison will be inducted into the National Women’s Hall of Fame last Thursday as part of a posthumous class of Black honorees that also includes Henrietta Lacks, whose cells were widely used in biomedical research; Barbara Hillary, the first Black woman to travel to both the North and South Poles, and civil rights activists Barbara Rose Johns Powell and Mary Church Terrell.

The evening ceremony will be the first in a series of planned virtual inductions meant to correct a lack of diversity among honorees, hall officials said in a news release.

“In order to openly acknowledge and amend the disparities within the nomination pool, the virtual induction series will recognize and induct other marginalized women of achievement including those from the Latinx, Asian, Native American, LGBTQ+ sisterhoods, as well as additional Black women,” it said.

The National Women’s Hall of Fame was founded in 1969 in Seneca Falls, the site of the first women’s rights convention.

Franklin had dozens of hits over a half-century and her signature song, “Respect,” has stood as a cultural icon. She won 18 Grammy awards and, in 1987, became the first woman inducted into the Rock and Roll Hall of Fame.

Franklin died of pancreatic cancer at her home in Detroit in 2018. She was 76.

Morrison helped raise American multiculturalism to the world stage. She was nearly 40 when her first novel, “The Bluest Eye,” was published. After just six novels, Morrison in 1993 became the first Black woman to receive the Nobel literature prize, earning praise from the Swedish academy for her “visionary force.”

In 2012, President Barack Obama awarded Morrison a Presidential Medal of Freedom. She was 88 years old when she died last year.

The case of Henrietta Lacks was the subject of a bestselling 2010 book and a 2017 HBO film. It began when researchers took a sample of cancer cells without her permission while she was under anesthesia and found they could be grown indefinitely.

The so-called “HeLa” cells became crucial for understanding viruses, cancer treatments, in vitro fertilization and development of vaccines, including the polio vaccine. She died in 1951 at just 31.

The adventurer Hillary became fascinated with travel after retiring from a nursing career. She was 75 years old when she became the first Black woman to set foot on the North Pole and stood on the South Pole five years later. She died at 88 in 2019.

Johns Powell was 16 years old in 1951, when she led a student strike for equal education at R.R. Moton High School in Farmville, Virginia. The students’ cause gained the support of NAACP lawyers, who filed a lawsuit that would become one of the five cases that the U.S. Supreme Court reviewed in Brown v. Board of Education. The high court’s landmark 1954 decision declared “separate but equal” public schools unconstitutional.

Born during the Civil War, Terrell was a dedicated suffragist whose civil rights activism continued up until her death in 1954 at the age of 90.

Terrell was the first Black woman in the United States appointed to the school board of a major city, the District of Columbia. She was a founding member and the first president of the National Association of Colored Women and was a charter member of the National Association for the Advancement of Colored People and the Colored Women’s League of Washington.