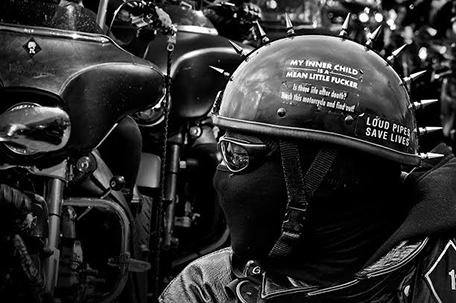 The stunning new documentary by DeVaughn Hughson, Outcast Forever (2016), offers a frank and majestic portrait of the first nationwide all-Black motorcycle club, Outcast, formed in 1969 in Detroit, Michigan by Sonny Day, Angel Herb and others. Part history lesson, part sociological document and part strip-tease, the film Outcast Forever reveals that the expressed love of motorcycles and freedom by wide ranging and diverse Black male motorcycle club members forms a core belief system around which a subterranean fraternal order of Black non-conformists have built a place of refuge, replenishment, healing and hedonism for all their members to enjoy.

The documentary also reveals a deep and permanent brotherhood of Black male non-conformists who are either war veterans or roustabouts, factory workers or tough guys, family men or lone wolves; many of whom lead double lives to honor their code of OFFO (Outcast Forever/Forever Outcast) and respect to the death the biker lifestyle. With rigorous and at times hilarious initiation rituals not unlike those of college fraternities and challenging probationary periods for wannabe members, admission into the club creates not only a bond among its members, but also a bond among the various nationwide chapters of the club. Chapters in cities which stretch across the United States, linked by thousands of miles of freeways and the skull symbol of the old man with braids that signifies a member as an Outcast.

Without giving away the entire film, I’d like to briefly explore two of the many fascinating aspects within this documentary: First, the contradictory and segregated racial aspects of the biker code; second, the provocative concept of women as property within the biker world. A main impetuses for the foundation of an all-Black bikers club in 1969 was because of the deep racial divide that kept existing White biker clubs-  nearly all White, with few if any Black members allowed. In spite of Hell Angels leader Sonny Barger’s comments to the contrary, Black membership in the Hell’s Angels was notoriously difficult and often stymied for reasons of White supremacy. As Hunter S. Thompson observed in his book” I had been around the Angels long enough to get the drift of their thinking on “ni666rs”…”  The vicious murder of Meredith Curly Hunter Jr., a Black man by multiple drunken and aggressive Hell’s Angels members acting as stage security at the Rolling Stones Altamont Free Concert in 1969 made clear that the club’s tolerance for Blacks by its well defined limits. Although there were other all Black motorcycle clubs across the country, the creation and nationwide popularity of the Outcast Motorcycle club was based in no small part upon this racial exclusion of Blacks from the more notorious White biker clubs.

However, one of the Outcast members of the Alabama chapter– Big Bear– tells us that the biker code is such that if a biker of whatever race or club sees another biker broken down on the side of the road, he is obligated to help him. So that regardless of the racial segregation that exists within the world at large and within the biker world, the code of the biker, trumps all of these barriers. It is in this way that perhaps we could see the biker world as a sort of “freemasonry” on wheels, whose ideals of brotherhood revolves around the two wheels of independence that a biker rides upon and the freeways that they travel upon in groups. Although there are animosities within the separate chapters and between the different clubs, these disparate radical and rugged individuals unite much like the racially segregated Freemasons by,” the religion upon which all men can agree.”

The biker world as seen in Outcast Forever is a curious paradox of independence from the “normal” world and dependence upon others within the club, segregation of races and conformity to the tenets of non-conformity. One is made to adhere to a discipline for the right to pursue undisciplined behaviors. These well-balanced and opposing contradictions are some of the most fascinating and engrossing aspects of the biker lifestyle as revealed in Outcast Forever .

The second most enigmatic aspect of the documentary is the troubling notion of women as property. Girlfriends, female acquaintances and female entertainers are affectionately branded as “property of Outcast,” or “PO’s” for short. The women speak freely of their commitment to the bikers and their way of life as we are shown images of their undulating buttocks and pole dancing expertise- all as many of them give the viewer the obligatory middle finger as they claim,” Outcast Forever/Forever Outcast” and proudly display their “property of Outcast” patches. It is within the motorcycle club and the biker world that women are ruled under a rigid and well defined heterosexual, cisgendered and patriarchal social structure where women have their place, but cannot tell a man what to do or not do. Such an intolerant and cloistered world with its dominion over women brings to the forefront the irony of a motorcycle club established to protect the non-conformity and freedom of Black males that itself rests upon the tight control and subservience of women as property.

When the wife of Outcast biker, P-Nut of the Georgia chapter, speaks of his long absences from home and his children and her need to trust him as he lives in the biker world where she knows,”…exactly what’s going on there,” you can feel the tension in their marriage. But also you can sense the need for her to allow her husband to be himself in a way that absolute conformity to bourgeois ideals could never satisfy. It is a painful moment that allows one to understand that the motorcycle club itself acts as a kind of psychological safety valve that protects its members from the omnipresent domination of the Black male individual to conform to White society’s value systems that would otherwise render them indistinct and moot as human beings and as men.

The Outcast Motorcycle Club is a reclamation of Black male individuality, patriarchal heritage and fraternity that stands defiantly in the face of the lethal social control mechanisms that exist within American society designed to subjugate and neuter Black males as a means of lessening White society’s fear of the Black male. This reclamation of Black individuality and independence often comes an exorbitant price in the form of jobs lost, marriages that fail because of the absolute commitment to the biker lifestyle, and the brothers who die in motorcycle accidents, intra-factional altercations with other members, encounters with the police or with outsiders.

The Biker lifestyle isn’t for everyone and it wasn’t meant to be; it’s ride or die; roll wit it or be rolled over; Outcast Forever/Forever Outcast.

Before concluding, I’d like to give some attention and praise concerning the form and style of Outcast Forever and the extraordinary efforts of filmmaker DeVaughn Hughson, his cinematographer Gabriel Moscovitz with whom he shares credit along with editor Jeremy Rall and producer Jason Staten. Hughson and his team have put together a dazzling documentary that far advances stylistically upon the “talking heads” format of lesser works of the genre. In fact, the breathtaking shots, B&W and muted color cinematography, rapid editing and thoughtful juxtapositioning of sequences and subject matter make Outcast Forever a refreshingly cinematic documentary that appears always in motion. The overall effect of the work, particularly upon Black male viewers, is to seduce the viewer into sharing the feeling of physical exhilaration and personal freedom found in motorcycle riding and being a member of a Black motorcycle club.

The aesthetic seduction begins with the beautiful prologue that starts the documentary (which also doubles as the trailer for the film that has been embedded below for you to see) with its classical music placed alongside a furious montage of B&W images of the bikers dressed in full regalia and riding their black Harley-Davidsons in a long serpentine line on the freeway that stands as the ultimate symbol of fraternity, unity and non-conformist individualism. There is a dazzling variety of visually stunning camera placements on handlebars, fenders, mirrors, and handgrips to allow the spectator to share a biker and his bike’s perspective of the road rapidly flowing past you as you ride in the Zen-like euphoric state that encompasses the universality of the religion upon which all bikers can agree: that of the biker, his bike and the road.

And finally, but most importantly, the images of the Black bikers themselves which sometimes evoke the mythic –though long suppressed- images of Black cowboys or the legend of first Black U.S. Marshall, Bass Reeves (1838-1910) of the American frontier. Specifically, the image of Outcast co-founder and embattled president Sonny Day, who cuts a potent figure of Black masculine swagger in his lengthy Black duster, cowboy hat and no bullshit demeanor. Riding his Harley on the freeway with an ease, a freedom and such a certainty of where he is going that when he takes his eyes off the road to look directly into the camera it almost makes one want to immediately go shopping for a black motorcycle before the documentary even ends.

The film seduces the Black male viewer in no small part because its director DeVaughn Hughson, who cut his “cinematic” teeth making music videos, has brilliantly applied the music video aesthetic to the form of a documentary and in doing so, he and his collaborators have given this particular work an individualistic style that compliments the individuality and non-conformist ideals of its subject matter.

So for the difficult issues the film approaches with an unapologetic frankness; the historical importance of documenting the oldest nationwide all Black motorcycle club; the style and form the film uses in its approach to its subject matter; and the iconic images of Black masculine swagger- I highly recommend viewing the film Outcast Forever. The film is available for a limited time for on demand streaming on Vimeo.com.

Even if the biker lifestyle isn’t for everyone; seeing this documentary on the nation’s oldest all Black motorcycle club should be.