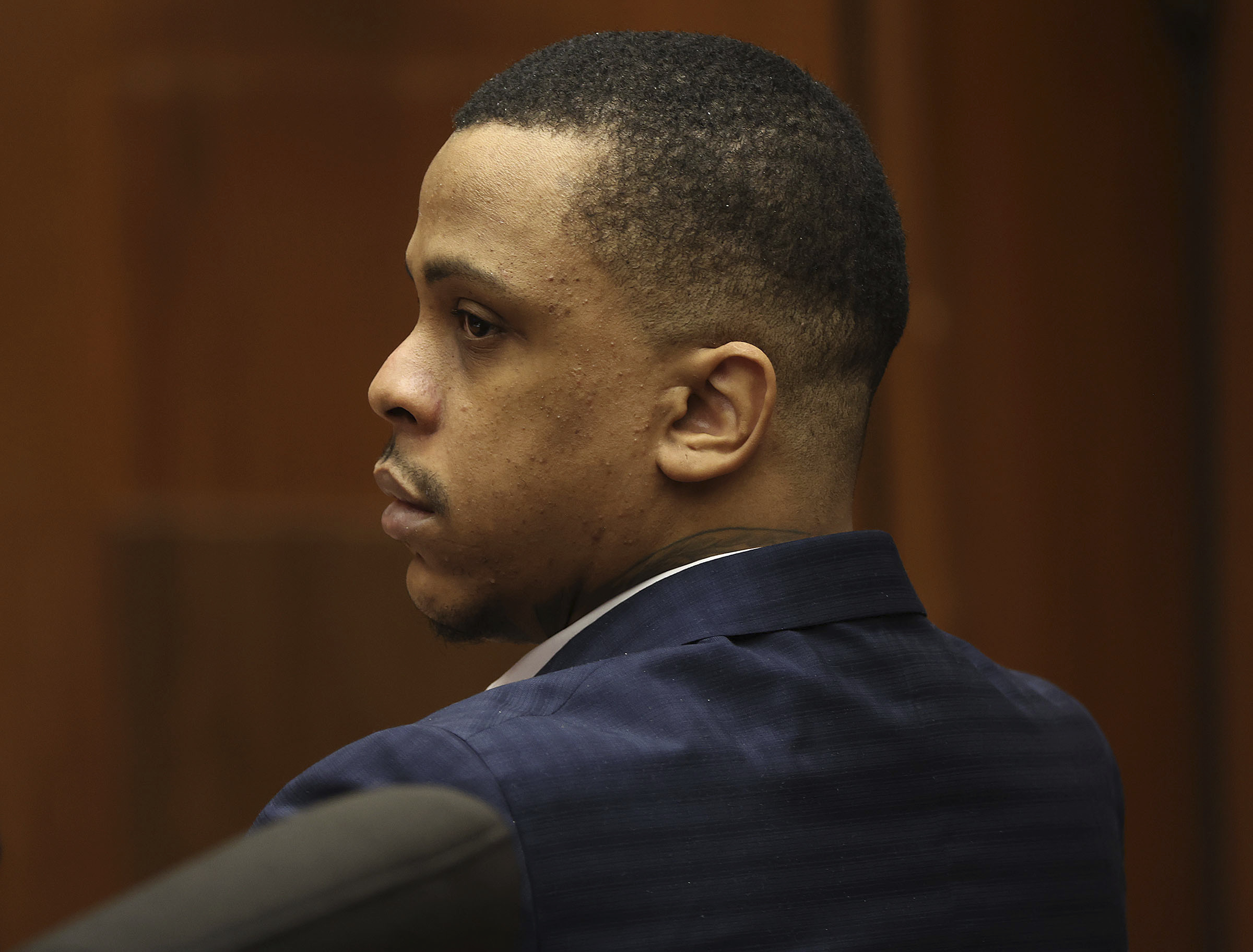 Above photo: DEFENDANT ERIC HOLDER LISTENS during opening statements in his murder trial, Wednesday, June 15, 2022, at Los Angeles Superior Court in Los Angeles. Holder, 32, faces one count of first degree-murder and two counts of attempted first-degree murder for the killing the Grammy Award-winning rapper Nipsey Hussle outside his clothing store three years ago.

LOS ANGELES (AP) — A woman testified Monday that she unwittingly drove the man now charged with killing rapper Nipsey Hussle to and from the scene of the shooting, not accepting that he had fired the deadly shots despite seeing him load a gun moments before.

Bryannita Nicholson, 35, said that when she and Eric Holder, with whom she had been in a casual relationship (but not quite dating) for about five weeks, pulled into a South Los Angeles shopping center on March 31, 2019, she was surprised and gleeful to spot Hussle, whose music she loved.

“I said, ‘Ooh, there goes Nipsey, he fine,” Nicholson testified, “I want to take a picture with him.’”

The testimony from Nicholson, a key prosecution witness who is getting immunity in exchange, came on the fourth day of Holder’s trial. He is charged with first degree murder for the killing of the 33-year-old hip-hop artist who had just been nominated for Grammy for his major-label-debut album after years of underground acclaim.

Nicholson said she had not known that Hussle owned the shopping center that was home to his clothing store The Marathon and the Master Burger restaurant where Holder had told her to stop so he could get food.

Without telling her that he knew Hussle from growing up in the same neighborhood and having ties to the same street gang, Holder got out of the car and walked to Hussle while Nicholson was looking for parking.

“I just thought he was trying to beat me to go see him before I saw him,” Nicholson said.

When she joined Holder he was talking to Hussle, his voice raised to make his point but not seeming aggressive.

“Eric was asking Nipsey, ‘Did you tell somebody I snitched?’” Nicholson said.

She waited her turn then took a selfie with Hussle, possibly the final photo he ever appeared in. It was shown in court, with Nicholson smiling in sunglasses and Hussle, bearded with a white T-shirt and white headscarf, looking with a steely gaze at the camera from behind her.

“I was just excited, I was just happy, I just wanted to show my Facebook friends,” said Nicholson, who hurried back to the car and posted the picture.

Holder went into Master Burger, came out with chili fries, and told her to drive around the block. As she did that, he pulled out a black semi-automatic handgun, loaded its magazine, and attached it.

“I was like, ‘What are you doing?’ You put that away, you ain’t going to shoot nothing outside my car,” Nicholson testified. “He did put it away.”

Nicholson said that at Holder’s instruction, she pulled into an alley where he said he wanted to stop and eat. He took a few bites of his fries, and didn’t seem angry or upset. He told Nicholson not to go anywhere — he would be right back.

Nicholson said she thought he might be getting a shirt at Hussle’s store. But she soon heard gunshots, and saw an older man running.

She considered fleeing and started to move her car, but changed her mind, worried Holder may have been hurt.

Previous witnesses in the case testified that they saw Holder shoot Hussle at least 10 times, then kick him in the head before walking away.

On Monday, a prosecutor showed police body camera video of Hussle lying splayed out and still in the parking lot as his brother loudly counted and pressed on his chest, trying to revive him with CPR under the instruction of a 911 operator.

At Nicholson’s car, Holder soon appeared, “power-walking,” she said, and got in.

“I was like, ‘What happened?,’” Nicholson testified. “He said, ”You talk too much I ought to slap you. And he was just like, ‘Drive! Drive!’” she said.

Nicholson’s identity had been hidden during her 2019 testimony in front of a grand jury. On Monday her name was revealed as she told essentially the same story in open court, with Holder sitting nearby, mostly staring straight forward and giving no visible response.

Holder refused to talk as she drove him home to Long Beach on the day of the shooting, Nicholson said.

She would later learn on the local news that Hussle had been killed. On Facebook, friends were saying in comments under her Hussle picture and on their own page that Holder was the suspect.

“Did it start to occur to you at that moment that Eric might have done it?” Deputy District Attorney John McKinney asked.

But when Holder called her that evening, he asked her to pick him up and she brought him back to the Los Angeles home.

Nicholson struggled to explain why she would do that after what she had learned before court adjourned for the day.

She resumes testifying on Tuesday.