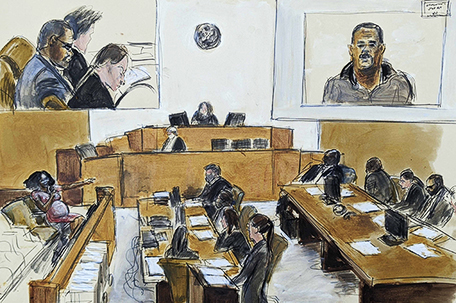 ABOVE PHOTO: In this courtroom artist’s sketch made from a video screen monitor of a Brooklyn courtroom, defendant R. Kelly, top left, listens as Jerhonda Pace, far left, testifies against the R&B star during the singer’s sex abuse trial, Wednesday Aug. 18, 2021, in New York. (Elizabeth Williams via AP)

NEW YORK — R. Kelly paid $200,000 to settle a lawsuit brought by a woman who accused him of giving her herpes two decades ago without disclosing he had it, the woman testified on Friday at the R&B singer’s sex-trafficking trial.

The woman — testifying during the trial’s third week without using her full real name — told a New York City jury she was 27 when she met Kelly through a mutual friend in 2001. She said when they began having sex, she told him she was worried about STDs, including AIDS.

When she asked him to use protection, “he just said no,” she testified.

It was the second time this week that jurors have heard testimony alleging Kelly gave a sex partner herpes — part of a case accusing him of leading a criminal enterprise that sexually exploited women, girls and even boys during a 30-year career highlighted by his anthem “I Believe I Can Fly.”

Kelly, 54, has denied any wrongdoing. His lawyers have portrayed his accusers as groupies who are lying about their relationships with him.

The defendant has been trailed for decades by complaints and allegations about his sexual behavior. The scrutiny intensified again amid the #MeToo movement in recent years, with multiple women going public with accusations against the singer that have resulted in federal criminal charges in New York and Chicago, keeping him in jail since 2019.

There will be a break in the trial until Thursday. The government is expected to rest its case sometime during the week of Sept. 13.

R. Kelly accuser testifies that he sexually abused her at 17