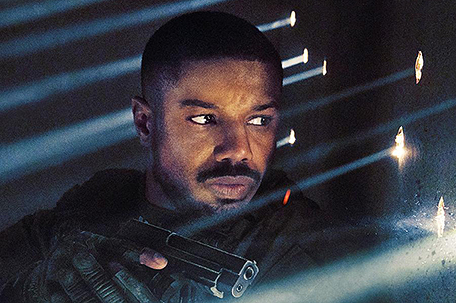 Some events are so reprehensible that the only proper response is expediting karma.

Audiences cheered when “John Wick” came out of retirement to avenge his puppy’s death at the hands of a group of bad guys deemed untouchable.

In the film “The Count of Monte Cristo,” Edmond Dantés showed how patience and a particular skill set can pay off when he devises an intricate plan to pay back his former friend Fernand Mondego for his unimaginable betrayal.

Fans of action revenge thrillers will enjoy “Without Remorse” for the same reason.

Directed by Stefano Sollima and written by Taylor Sheridan and Will Staples, the film “Without Remorse” is based on Tom Clancy’s 1993 thriller novel of the same name. It also is a spin-off of the Jack Ryan series. It stars Michael B. Jordan as Senior Chief John Kelly, Lauren London as Pam Kelly, Jodie Turner-Smith as Lt. Commander Karen Greer, Jamie Bell as Robert Ritter, Guy Pearce as Secretary Clay, Jacob Scipio as Hatchet, Todd Lasance as Dallas, Jack Kesy as Thunder, Brett Gelman as Victor Rykov and Colman Domingo as Pastor West.

“Without Remorse” opens during a U.S. Navy SEALs mission in a region of Syria ravaged by war. Led by Chief John Kelly (Jordan), the team rescues a hostage from ex-Russian military. It becomes clear at the end of the mission, that neither the team nor Kelly were briefed on the true details of the mission. Three months later, Kelly is back at home enjoying life with his pregnant wife Pam (London). The two discuss their excitement about parenthood and make plans for Kelly to take on a less dangerous job upon the arrival of their baby girl.

In an act of retaliation for the Syria mission, Russian assassins murder several members of the Navy SEALs team on US soil. The same assassins attempt to kill Kelly but are unsuccessful. He kills three of the four assassins in the process, but is unable to save his wife and unborn child. Kelly, riddled with bullets, wakes up in a hospital bed to the devastating news.

As he attempts to heal and rebuild his life, he learns that the CIA will take no further action in investigating the murder of his wife and unborn daughter. After he is given intel about the men responsible, he tracks down the corrupt Russian diplomat responsible for issuing the passports to the assassins responsible for Pam’s death. As Kelly begins to enact his revenge, he is sent to prison. The prison he is sent to is filled with Russians committed to finishing the assassin’s job. Kelly is able to bargain his way out of prison with information on one of the men responsible. With permission from Secretary Clay (Pearce), Kelly takes his team on a mission to retrieve the fourth assassin revealed to be Victor Rykov (Gelman).

Kelly’s world unravels as he becomes acutely aware of just how deep the corruption in the CIA goes.

“Without Remorse” is an action-packed thriller that will leave audiences on the edge of their seats. From beginning to end, the battle sequences are incredible to witness. Michael B. Jordan gives a powerful performance as a grief-stricken man on a mission to avenge the senseless murder of his family. The stakes are high, as Kelly and his team face insurmountable odds on a death mission. The sheer determination of Kelly to ensure the survival of his team, even if it means he does not make it out alive, is equally riveting — Kelly’s intentions are pure. After tremendous sacrifice and committing his life to the military, he is left with only the remnants of the life that he once knew. Adding insult to injury, his life and his sacrifices are seen solely as collateral damage for the greater good.

Additionally, “Without Remorse” shines light on the intersectionality of being a Black man fighting for America. “We serve a country that didn’t always love us back,” he explained. The film seeks to restore faith in justice, even in the face of devastating loss, adversity and the realization that life is not fair.

“Without Remorse” will be available to stream on Amazon Prime on April 30. It is a must-see!

Q&A: Michael B. Jordan on protest, power & ‘Without Remorse’