With ‘A Woman On the Outside,’ Kiara C. Jones explores a different side of incarceration 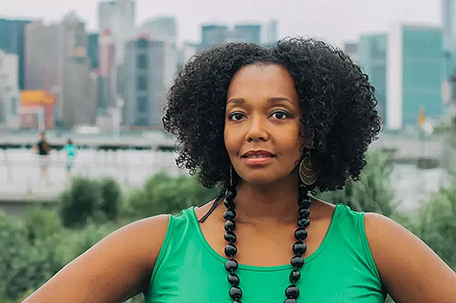 New York native Kiara C. Jones has always had a love for storytelling. She began her career as a poet and hip-hop artist before shifting to broadcast radio, television, and live shows.

Eventually, her desire to tell the kinds of stories that she wanted to see led her to New York University’s Graduate Film program where her work earned her Fox Television’s Benjamin L. Hooks Fellowship.

Her master’s degree in film gives Jones the opportunity to wear many hats as a writer, producer, and director with her company, Cultivated Films, LLC. She has devoted the last four years of her life to a brilliant documentary film called “A Woman on the Outside.”

“A Woman on the Outside” follows the life of Kristal Bush, owner of a transportation service called Bridging The Gap, a nonprofit that helps families stay connected to their loved ones that are incarcerated. Jones sat down with the SUN  to discuss her journey as the producer of this incredibly moving film.

Jones’s passion for storytelling began in childhood and was sparked by her mother.

“My mom was a really beautiful reader and used to do all the short stories for me, with all the voices, and do all the poems for me,” she said. “I was an avid reader and lover of books. When I was young, I started writing short stories and poetry and it sort of became my thing in school when everything else wasn’t going great. I was still a great writer.”

After continuing with poetry and winning various competitions, Jones explored additional avenues of expression before focusing her creativity on film.

“I had all of this visual storytelling knowledge that I wanted to turn into my own stories, because I was using all my talents to tell other people’s stories,” she said. “So, I decided to go to film school at NYU and the rest is history. NYU was a fabulous place to go to film school. I don’t say that you have to go to film school to be a filmmaker, but they put me in the room with 30 of the most interesting, talented, brilliant minds that I had ever met, and we all really supported each other in figuring out our voice, our vision and how we wanted to tell stories. The lucky part is [that] I get to mostly do things that I truly believe in and the work that I’ve done is very fulfilling to me since I transitioned into being a filmmaker —  but it’s a lot of work!”

As a filmmaker, Jones was very clear on who and what she wanted to tell stories about.

Jones shines a bright light on Kristal Bush in her documentary “A Woman on the Outside.” Bush has a lifetime of experience with loving her father and brothers from the other side of prison walls. As a result, she reunites other families with their loved ones through her prison van service, Bridging the Gap.

Additionally, Bush is a social worker and the guardian and caregiver for her nephew Nyvae, who she plans to adopt. Due to the stigma of prison, there are many people like Bush who have been isolated without being given the opportunity to share their stories or see their stories represented in film. Jones and the filmmaking team, comprised of all women, gave these families the opportunity to be seen in “A Woman on the Outside.”

“The filmmaking team, the directors Lisa Riordan Seville and Zara Katz, our editor Suzannah Herbert and of course Kristal Bush, who shares her story so intimately — you know we were a small and mighty filmmaking team but really that’s it,” Jones said.

“Lisa and Zara started this project years ago and it started as an exploration of the stories that were left behind,” Jones said. “Lisa was reporting and utilizing women to access people who were incarcerated, and then realizing that those voices were not being heard in the stories that were actually being published. You can’t just call somebody that’s in prison. How do you get in touch with them? You get in touch with somebody that they love, and that person is normally a wife, sister, mother, girlfriend, or someone in that vein. It didn’t start as a documentary. It started as a conversation and evolved into a documentary.”

Kristal Bush’s generosity and willingness to share her story played a major role in the evolution of this documentary.

“Part of that was meeting Kristal Bush and them saying to her, ‘we’re looking for more women to talk to, because we’re trying to have this conversation about what it is to support and be the caregiver of someone who’s incarcerated,” Jones said. She [Bush] said,‘why don’t you just come on the van?’ That opened up this whole world for them being on the van and seeing what this life and lifestyle was of having so much of your time, energy, financial assets and emotional currency spent on traveling hours and hours away to visit an incarcerated loved one on the weekends. This is a life and lifestyle that most people don’t have any insight into —  they never think about it and what that does to you.”

There is a dehumanizing factor that happens for a lot of people as it pertains to their perception of prison. In the film Bush says that, “the dynamic of a prison is set up to break us.”

“It was shocking, surprising and heartwarming to see the amount of care that goes into taking that journey,” Jones said. “I’ve visited loved ones that are incarcerated… it triggered me. It triggered a lot of things that I’ve experienced — things that I know in my mind people think nobody else has been through this, nobody else knows what I’m feeling. We wanted to break that. People know what you’re going through, and more people than you think. For Kristal and the rest of the van riders, to invite our cameras in and allow us to bring this very visceral moment to the audience was very generous.”

It takes nuance and sensitivity to craft a story like ‘ A Woman on the Outside,’ a feat Jones and her filmmaking team achieved seamlessly.

The title “A Woman on the Outside” speaks to the complexities of families on the outside that in many ways are serving time along with their loved ones.

“We started using the term “externally incarcerated,” because if you choose to be the caregiver for your incarcerated loved one, you end up incarcerated,” Jones said. “You have to deal with all the rules of incarceration, which include random court dates, parole and reincarceration… all of these things that you didn’t do anything to have to be involved in, but you’re there.  The other [side of it]  is it’s almost like an out of body experience. You’re looking at this happening to you like it’s happening to someone else… like this can’t be my reality.”

Ultimately “A Woman on the Outside” is a story about family and persevering in the face of insurmountable odds. Jones shared her hope for audiences.

“This isn’t a film that has sort of a call to action like some documentaries will leave you with,” she said. “What it has is a call to conversation. We want people to start talking out loud about their experiences with incarceration and supporting their incarcerated loved ones, so that we can break the stigma that is associated with that type of nurturing care. There are huge systemic, legal, and cultural problems that need to be addressed. But I think the thing that we might be able to effect change with quickly is supporting women who are supporting people who are incarcerated.”

To find out more about additional upcoming screenings and how you can support this brilliant film, visit: www.womanontheoutsidefilm.com. To keep up with all of the things Kiara C. Jones is up to, visit her website at: www.cultivatedfilms.com.