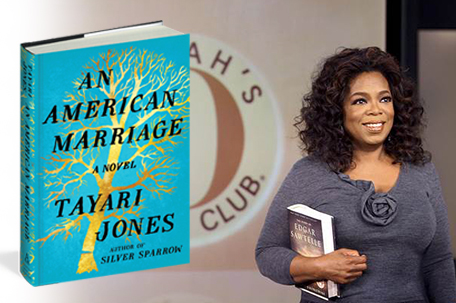 NEW YORK — Tayari Jones, whose novel “An American Marriage” has been chosen for Oprah Winfrey’s book club, will always remember that phone call from last October.

She was driving in Las Vegas, expecting to hear from books editor Leigh Haber of Winfrey’s magazine, “O,” for which Jones has written reviews.

“But instead of Leigh’s voice coming through the sound system of my car, it was Oprah’s,” Jones, 47, told The Associated Press during a recent interview. “I would have known that voice anywhere. And I just pulled over, in a not-so-great part of town. And people were tapping on my windows, and I was like, ‘Go away, I’m trying to have the biggest moment of my life.’”

Winfrey’s magazine and OWN network told The Associated Press on Tuesday that Winfrey had selected Jones’ story of a young, newly married African-American couple and the husband’s shocking arrest and prison term — for a crime no one he knows believes he committed — that upends their lives. Winfrey’s production company, Harpo Films, is planning an adaptation.

Published Tuesday, the book was already one of the year’s most anticipated novels and had reached the top 1,000 on Amazon.com before Winfrey’s announcement. “An American Marriage” includes blurbs from Michael Chabon and Edwidge Danticat and was praised by The Washington Post as a compelling story that raises “punishing questions” and spins them “with tender patience.” In a brief telephone interview with The Associated Press, Winfrey said Jones’ novel made her respond in a similar way to other works she has picked for her club: She just had to tell others about it.

“I just get such a deep pleasure from the written word and finding out that other people feel the same way,” said Winfrey. “It’s kind of like sharing values. It’s like saying here’s an experience that I value and you’re trying to get somebody to also appreciate it.”

Winfrey’s interview with Jones will appear in the March issue of “O,” which comes out next week. As with other recent books, Winfrey will promote it in part through Amazon.com, where a video message from Winfrey is posted and an excerpt can be read for free on the Kindle e-book device.

Since starting her club in 1996, Winfrey has helped put dozens of books on the best-seller lists, from contemporary works such as Colson Whitehead’s “The Underground Railroad” to such classics as Tolstoy’s “Anna Karenina.” Recent choices have included Cynthia Bond’s “Ruby” and Imbolo Mbue’s “Behold the Dreamers.” Winfrey said during her recent interview that she liked choosing emerging authors such as Bond and Mbue and helping “to expose them to a wider audience.”

Jones’ previous books include “Silver Sparrow,” “The Untelling” and “Leaving Atlanta.” She is a longtime Winfrey admirer and says she was once in the studio audience for one of her shows, a broadcast from the early 1990s about gay rights. Like countless authors, she had dreamed of being picked for the Oprah book club, but never let herself believe it would happen.

“An American Marriage” took several years to complete. While on a research fellowship at Harvard University, Jones knew that she wanted to write about the criminal justice system, but only had a concept. She needed real people for inspiration. During a visit to her native Atlanta, she overheard a couple arguing.

“And the woman said, ‘You know you wouldn’t have waited for ME for seven years,’” Jones recalled. “And the man shot back, ‘This wouldn’t have happened to you in the first place.’ And I thought, ‘He’s right and she’s also right.’ And that’s when I knew I had a novel, when I had a conflict between two people and both of them are right.”

Winfrey, too, was drawn to how “An American Marriage” attached names and lives to an issue distant for most people. She remembered once hosting a program about incarceration and struggling to get viewers engaged because relatively few had direct experience.

“It’s hard to get someone to understand or relate to it,” she said. “But when you read a story like this it personalizes it for you.”