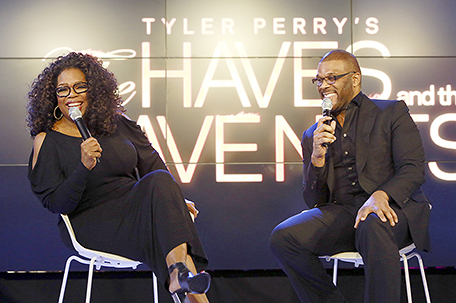 But Tyler Perry and Oprah Winfrey, who started working together about four years ago, still manage to be BFFs. The secret? Keeping their friendship a priority.

Before he started producing hits like “The Haves and Have Nots” for her OWN Network, Perry and Winfrey met in her Chicago home to discuss what their partnership would look like.

“We sat in the room before we signed any deals. He actually said to me, ‘How are you going to feel when people come along and say I saved the network?’ And I said, ‘I’m gonna say, “Wasn’t I smart?’’’” she said, laughing.

Perry is quick to dismiss such talk, giving Winfrey all the credit.

“Had she not put the things in place, then I wouldn’t be successful,” he said. “And also, when OWN was having some troubling times, people stayed with the OWN network … because it was the Oprah Winfrey channel, that was why the advertisers stayed, that was why it’s doing so well now.”

Winfrey notes that people often try to concoct story lines of friction between them, but they are exceedingly close: She credits their relationship staying intact with their ability to talk freely and be honest with each other, whether they agree or not.

Winfrey is godmother to Perry’s infant son, Aman: “I’ve seen a lot of pictures. He’s one of those parents.”

She recalls one extraordinary moment in their friendship that exemplifies their relationship:

“One day I was feeling down about something, I don’t remember what it was,” she said. “But he flew all the way to California, knocks on my door, surprises me … (and) says, ‘I just wanted to see your face,’ gave me a hug and went back. Isn’t that pretty amazing? Not a meal, not a glass of water. That’s who he is.”