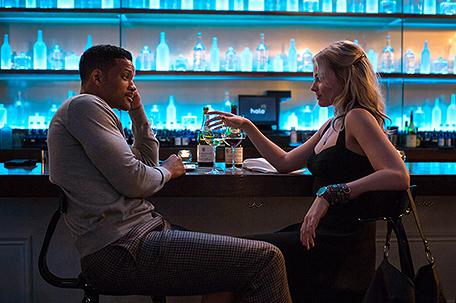 “It’s about distraction. It’s about focus. The brain is slow and it can’t multitask.

Tap him here, take from there.”

Will Smith stars as Nicky, a seasoned master of misdirection who becomes romantically involved with novice con artist Jess (Margot Robbie). As he’s teaching her the tricks of the trade, she gets too close for comfort and he abruptly breaks it off. Three years later, the former flame—now an accomplished femme fatale—shows up in Buenos Aires in the middle of the high stakes racecar circuit. In the midst of Nicky’s latest, very dangerous scheme, she throws his plans for a loop…and the consummate con man off his game.

Tambay A. Obenson of IndieWire’s Shadow and Act mentions that “…other top-tier actors had been courted for the part, including Brad Pitt. Pitt apparently wasn’t interested; but Ben Affleck was. However, he was pulled away by other commitments.

An interesting choice for Will Smith here, especially when you consider that, looking over his IMDBPro page, there are at least 20 different projects that he could’ve tackled next, over this one.

But maybe it’s a great script, and/or it provides him with the opportunity to do something different, assuming that it is.

So let’s see how this goes. I wish I could get my hands on the script for this. Will hasn’t exactly always been keen on doing love scenes on screen, so I’m curious if there are any in this one, since it’s said to be, in part, a love story, and how they’ll be handled given the obvious.”

The cast is headed by Oscar nominee Will Smith (The Pursuit of Happyness, Ali,) Margot Robbie (The Wolf of Wall Street,) Rodrigo Santoro (the 300 films) and Gerald McRaney (TV’s “House of Cards”).

Focus opens in theaters on February 27.