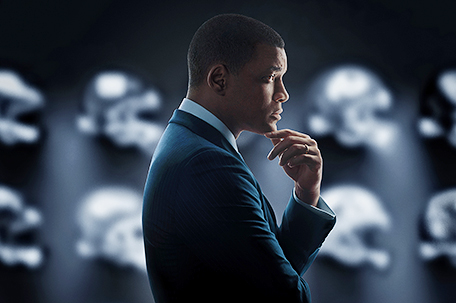 So it looks like Will Smith is back this year (2015), after a brief break from acting (although he had bit parts in films like “Winter’s Tale,” and the movie his son starred in, “After Earth”). Big Willy returns to leading man roles, with two 2015 features: “Focus” (which was released on February 27), and now, “Concussion,” which has been slotted for a Christmas Day 2015 opening, via Sony Pictures.

The last time Big Willy starred in 2 feature films in the same year, was in 2008 (“Hancock” and “Seven Pounds”) which, in hindsight, signaled the beginning of his hiatus, while he worked primarily behind the camera, producing work for his son and others (although he did return for a 3rd “Men in Black” movie, 4 years later, in 2012).

In “Concussion” Smith will tackle a very topical matter – concussions in the NFL – in a drama/thriller based on the GQ article “Game Brain,” which was written by Jeanne Marie Laskas, and follows Dr. Bennet Omalu, the forensic neuropathologist who single-handedly made the first discovery of CTE (Chronic Traumatic Encephalopathy) in a pro football player, raising public awareness for the degenerative disease.

The article tells a whistle-blower tale, humanizing the price paid by professional athletes in impact sports, and the political, cultural and corporate interests that fuel the business of professional sports.

Of course Will Smith stars as Dr. Omalu, under the direction of Peter Landesman, who also penned script.

The project joins other upcoming films on CTE in development, including “Game Time Decision,” Matthew Cherry’s follow-up to his feature film debut, “The Last Fall,” which attracted the acting talents of Isaiah Washington, who will star as a retired football player suffering from the effects of concussions sustained during his professional career, as he tries to reconnect with his estranged family, notably a son following in his father’s footsteps, in danger of a similar kind of future.

The goal of each film is to highlight Chronic Traumatic Encephalopathy, which is common in individuals with a history of multiple concussions and other forms of head injury; An affliction suffered by dozens of deceased former players, like Junior Seau.

Oscar has eluded Will Smith, despite 2 nominations within a 5-year period. Playing what will likely be a meaty role in Dr Omalu, in what will also probably be a weighty, dramatic, hopefully finely-crafted and produced project, tackling a very topical subject, just might mean a 3rd. And given that Sony has set an X-Mas day release for the film, one can only speculate that the studio thinks it has a contender on its hands.