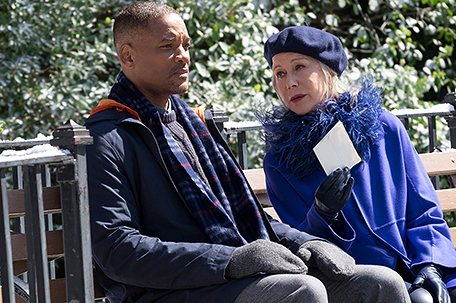 NEW YORK — Will Smith had already begun researching his role for “Collateral Beauty” when he learned that his father was terminally ill.

Smith said at the film’s world premiere in New York on Monday that he had to channel the emotions of that tragic news into a demanding film role. Smith’s father, Willard Carroll Smith Jr., died on Nov. 7.

“My father was diagnosed and given six weeks, so you know, to be hit with that in the process and then what we decided to do was just use the preparation of the character to actually deal with what my father was experiencing,” Smith said. “It became our way of saying goodbye, essentially. It was a really beautiful confluence of art and life.”

Smith stars in the film as a father who suffers a great tragedy and begins to question the point of existence.

“It is such a beautiful concept. It’s a guy that experiences a loss and gets furious at the universe, and writes these letters to Love, Time and Death, and his mind is so twisted that he mails the letters. And then, Love, Time and Death respond. You know, it’s that beautiful Christmas twist to it, but dealing with real issues,” Smith said.

The film also stars Helen Mirren in the role of Death. She admitted to loving the script, and felt it shared the same vibe as Christmas classics like “It’s a Wonderful Life” and “A Christmas Carol.”

“There was something very, very true in the center of it. And kind of as a Christmas movie, you know it’s kind of a pretty cool Christmas gift of a movie,” Mirren said.

Edward Norton, who plays Smith’s best friend and partner in the film, also said he saw a strong similarity with the film to holiday classics like “It’s a Wonderful Life.”

“They straddle this very difficult balance between, obviously being very heart-winning and heart-warming and hopeful. But if you think about it, they touch on very dark and difficult things. Jimmy Stewart is in such despair he’s going to a bridge to jump, right? But somehow they manage to be about deep and important things, while also being a lot of fun,” Norton said.