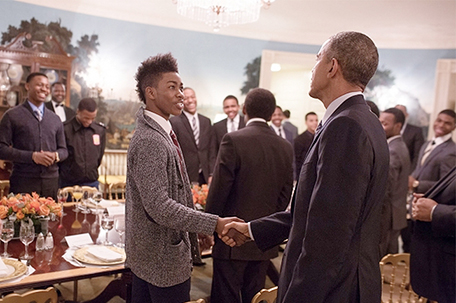 ABOVE PHOTO:  On the first anniversary of the My Brother’s Keeper initiative, President Barack Obama greets Gerard Contee during a mentee lunch in the Diplomatic Reception Room of the White House, Feb. 27, 2015.  (Official White House Photo by Pete Souza)

The Foundation will embark on domestic tour to expose underserved youth to careers and professionals in the entertainment industry.

This tour aims to target young people who are interested in careers and entrepreneurial opportunities available in the entertainment industry. This effort will focus on students (high school and college-aged) many of whom are eager to break into the industry. 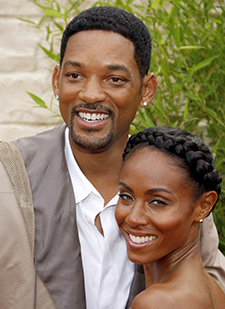 “The My Brother’s Keeper Task Force applauds the Will & Jada Smith Family Foundation for responding to President Obama’s call to action to ensure all youth have clear pathways to opportunity and success,” said Broderick Johnson, Assistant to the President, Cabinet Secretary, and Chair of the My Brother’s Keeper Task Force. “We commend Will and Jada for leveraging their unique platform and networks to inspire and engage our nation’s most vulnerable youth, whose tremendous talents are too often underrepresented in this and other industries.”

Two years ago, President Obama launched My Brother’s Keeper to address persistent opportunity gaps and to tear down barriers that too often prevent boys and young men of color and other young people from realizing their potential. Since then, the call to action has been answered by numerous sectors. All industries including, federal and local government, business, nonprofits, local education agencies, even individuals have worked to make a difference in the lives of the young people of our nation. The goal of this tour is to position the next generation of young people with marketable and translatable skills in the hopes that their dreams, talents and love or interest in film can be turned into meaningful professional careers and successful business ventures.

“The Careers in Entertainment Tour is an engine for change in our industry, and a means of closing the gap between dreams and the tools necessary to achieve them,” Jada Pinkett-Smith said, “This initiative in support of My Brother’s Keeper will engage our underserved young girls and boys in hope to inspire future generations — a responsibility I do not take lightly and one I cannot wait to bring to fruition.”

Each tour will feature general panels and breakout sessions with particular emphasis on specific segments of the industry of interest to students. Additionally, the tour will include federal partners such as the U.S. Small Business Administration, among other affiliated film and production organizations. Students will get an opportunity to hear from professionals that represent a variety of film and television industry jobs including filmmaking, television production, cinematography, composing, writing, project development, representation, distribution, sound design, film editing, public relations, and marketing to name a few. Each tour location will focus on the overall film and television profession, as well as the paths to achieve successful careers. The tour, slated to begin Fall 2016, will provide students from local school districts, community groups and colleges the opportunity to learn about careers in the film and media industry firsthand. Together, the Will & Jada Smith Family Foundation and various affiliates will help students identify key knowledge areas, skills and competencies that are essential for specific jobs, as well as entrepreneurial opportunities.

In the fall of 2015, SBA Millennial Champion, Mike Muse, along with other partners, collaborated on the Careers in Film Summit in Los Angeles to help shift the industry into a more inclusive direction.

To join our efforts, please go to www.cietour.org.