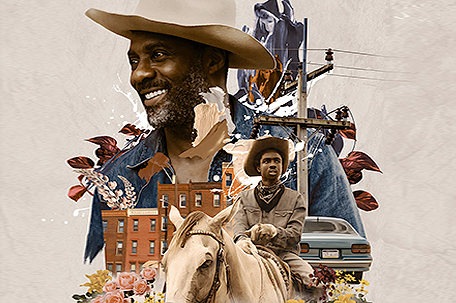 “Concrete Cowboys” is a coming of age story set in Philly… with horses.

One of my favorite political stories of all time was the story of former City Councilwoman Donna Reed Miller…and the horse in her backyard.

What made the story stand out for a lot of us was that the only time most of us saw a horse in Philadelphia, it was being ridden by a police officer during a parade. And if you had the misfortune of walking behind said officer, you were going to be smelling that for a while.

But the adventure with Reed Miller and her horse showed that Philadelphia in general, and Black Philadelphia in particular, has had a pretty significant horse culture for centuries. And it’s that culture that provides the setting for the Netflix film “Concrete Cowboy.”

The film, which is based on Greg Neri’s novel “Ghetto Cowboy,” is a coming-of-age story that also manages to mix in two of the city’s biggest challenges: the gun violence brought on by the drug trade and the gentrification that has taken away much of the land that these historic cowboys have used to keep their horses.

“Cowboy” begins with Cole (Caleb McLaughlin of “Stranger Things”) getting into another scuffle at another Detroit high school. His mother, Amahle (Liz Priestley) decides she’s had enough, drives her son to Philadelphia, and drops him off on the doorstep of his estranged father, Harp (Idris Elba), for the summer. Harp is one of a group of Fletcher Street residents that maintains, or attempts to maintain, a stable and some horses despite the onslaught of gentrification.

Now because this is a coming-of-age story, the protagonist has both an angel and a devil on his shoulder. The devil is Smush (Jharrel Jerome of “When They See Us”), a former Fletcher Street rider who’s trying to meet his goal of buying a ranch out West by keeping the money he’s earned selling drugs for a local dealer.

The angel is a horse that Cole ends up bonding with after he winds up sleeping in his stall after a fight with his father.

Admittedly, I’m not a big fan of coming-of-age stories. For the most part, you know how they’re going to end and while Ricky Staub does a better than adequate job getting you there with “Concrete Cowboy,” it is what it is.

But what I loved about this film was that it gave people who might not have known that (a) Philadelphia has a horse culture and (b) Black folks ride horses and have for a while, the chance to learn that history. There were even a few actual Fletcher Street riders in the film, so the authenticity was there.

Unfortunately, that authenticity included the gentrification that led to the Fletcher Street Stables having to relocate in 2019 after the film was finished.

“Concrete Cowboy” is worth your time because it’s a Philly film, featuring Philly history, told in a way that includes Philly people.

I like to think that former Councilwoman Donna Reed Miller, horse owner, is watching it somewhere.

The film is now showing on Netflix.