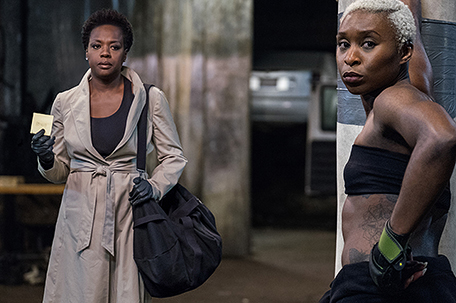 “Widows” was a British TV series which enjoyed a two-year run from 1983 to 1985. Created by legendary English author Lynda La Plante (“Prime Suspect”), the popular crime show was nominated for a British Academy of Film and television Arts (BAFTA) award in the “Best Television Drama” category. In 2002, ABC turned “Widows” into a four-part miniseries starring Brooke Shields and Rosie Perez, but that substantially-revised overhaul failed to resonate with the American audience.

Now, Academy Award-winning director Steve McQueen (“12 Years a Slave”) has brought a much more faithful adaptation to the screen, although the setting has been shifted from London to Chicago. The crime caper revolves around a trio of widows who opt to follow in their late husbands’ felonious footsteps in the wake of a botched bank heist.

Not long past the point of departure, veteran bank robber Harry Rawlings (Neeson) masterminds a robbery in which he and his partners perish. Trouble is, Harry died indebted to a couple of South Side mobsters (Kaluuya and Brian Tyree Henry) to the tune of $2 million.

Given a month to come up with cash (or else), Harry’s widow Veronica (Davis) hatches a plan to raise the money by burglarizing a safe in the mansion of a well-connected family headed by corrupt, Windy City Alderman Tom Mulligan (Duvall). To that end, she recruits a couple of the other grieving widows (Michelle Rodriguez and Elizabeth Debicki) and a getaway driver (Cynthia Erivo) with promises of a multimillion-dollar payday.

The plot proceeds to thicken in convincing fashion while touching on such timely themes as politics, loyalty, race and class. Since it would be a crime in itself to spoil the ensuing developments even one iota, suffice to say McQueen slowly ratchets up the tension in a searing, multi-layered suspense thriller not to be missed.

With the help of a delicious script expertly executed by a coterie of her talented co-stars, the incomparable Ms. Davis steals the show and delivers yet another Oscar-quality performance. Vintage Viola!

In English and Spanish with subtitles