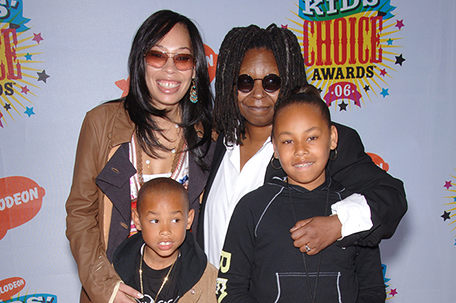 44 Blue Productions, award-winning producer, announced last week that it has signed an exclusive deal with Whoopi Goldberg’s production company, One Ho Productions, to develop a docu-series (aka reality TV show) around her daughter, Alex Martin, and her extended family. With her three children finally in their teens and 20s, Martin is excited to reinvent herself personally and professionally with the help of her husband, Bernard, and their best friends, Leisa and Ron. But when her oldest daughter, Amara, decides to move back home… with her fiancé and new baby, suddenly three generations will be living under one roof – and Alex’s plans may have to be put on hold.

“To say that Alex has a gift for frankness and humor is an understatement – and she clearly comes by it honestly,” said Stephanie Drachkovitch, Co-Founder & Executive Vice President of 44 Blue Productions. “Plenty of women face similar family dynamics, but they find support from their families and friends – in this case it’s Alex’s BFF since high school, Leisa. They keep each other honest and real!”

“I wanted to tell the story of two best friends who experience all of the major phases of a woman’s life together,” said Whoopi Goldberg. “Alex and Leisa have been friends since they were 17 and are both children of famous people, and are now approaching 40. My daughter just became a grandmother and her daughter just turned 24 and they are just trying to figure their lives out. This is really the story of an all-American family for a new generation; it looks a little different than the storybooks, but it’s filled with love and laughter. It’s very funny to watch them.”

“Watching Alex navigate the unexpected turns of her life and that of her family is anything but ordinary,” said Tom Leonardis, President and Executive Producer of One Ho Productions. “She and Leisa have basically raised their families together, putting their own humorous spin on the adage that ‘it takes a village.’ This family is funny, authentic and relatable – they just happen to have a famous family member who they look to for advice and the occasional reality check. Their story of multiple generations living together is one that will certainly resonate with viewers, and we’re eager to explore this phase along with them.”