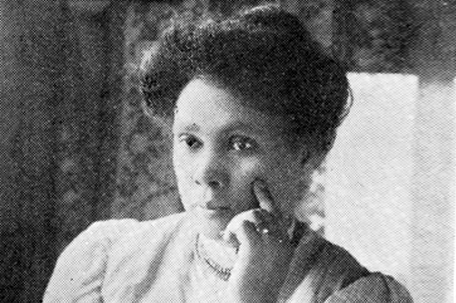 I don’t have to tell you that black women directors have been a force in filmmaking for decades. The list of African-American directors is endless, and continues to grow practically every single day.

But haven’t you wondered who the first Black woman to direct a film was? The answer is, not surprisingly, as it always is when you’re dealing with history, quite complex.

There are claims and counter-claims, and nuances of detail, that make it somewhat complicated, but let me try to at least clarify some things.

For the longest time, film scholars have championed their various favorites for the title of the first Black woman director, according to a paper from the Film Pioneers Project at Columbia University.

Some claim that honor goes to Drusilla Dunjee Houston, who wrote a screenplay in 1915 to challenge D.W. Griffith’s The Birth of Nation, called Spirit of the South: The Maddened Mob. But that film was never made, and she never actually directed a film to anyone’s current knowledge.

Then there are those who say the title belongs to Zora Neale Hurston (yes THAT Zora Neale Hurston) who made several anthropological documentary silent films, chronicling black Southern rural life, such as Children Games, Logging (both 1928) and Baptism (1929).

And still others claim that Alice B. Russell, the second wife of Oscar Michaeux, who helped produce his films, and acted in several of them, should have the title.

But for much of history, scholars made the claim that Eloyce King Patrick Gist, who, along with her husband, James Gist, directed religious films that were shown to community groups and church congregations, such as Hell Bound Train (1929) and Verdict Not Guilty (1930), was the first black woman to direct a film.

However, research may prove that Gist did not actually co-direct Hell Bound Train, but rather rewrote and re-edited the film, after her husband made the film, while Verdict was actually produced, written and directed entirely by James.

But there is evidence that, some 6 years earlier, in 1923, Maria P. Williams (pictured above), who lived in Kansas City, made a feature film titled The Flames of Wrath (no surviving prints exist), which was described as “a mystery drama.” The sticking point here is that Williams was listed, when the film came out, as the producer and writer of the film, but not as the director.

Now this may all be just a question of semantics, since, back then, the words “producer” and “director” were interchangeable; and secondly, the fact of the matter is that Williams was still a filmmaker nevertheless.

However, just a year before, in 1922, also by coincidence, in Kansas City, Tressie Souders was written about in the black press as being the first black woman to direct a feature film, which was called A Woman’s Error, described as “the first of its kind to be produced by a young woman of our race.”

And Souders was actually credited as being a writer, producer and the director of her film. So it seems that one could say that Tessie Sounders was indeed the first black woman director.

But not so fast.,,, as I said, the story gets complex…

Some argue that the first black female director was neither Souders nor Williams, but someone by the imposing name of Madame E. Touissant Welcome, whose birth name was Jennie Louis Van der Zee, and who was the sister of the famous Harlem Renaissance photographer James Van Der Zee.

It is known that she directed a film (whether a narrative or a documentary is not clear) involving black soldiers who had returned from fighting in Europe during World War I.

Since the war ended in November 1918, one must assume that her film was made sometime during the years of 1919 and 1922 (once again no prints have survived). So it could very well be argued that Madame Welcome was, in fact, the very first African-American woman film director.

But in the long run, whether it was Welcome or Hurston or Williams or Souders, or even someone who has yet to be discovered, the fact of the matter is that, black women directors have been a strong presence, not only in the development of black cinema, but of cinema in general, and that filmmakers today owe a tremendous thanks of gratitude to remarkable trailblazers for paving the way.