Who should play Nola Darling in Spike Lee’s ‘She’s Gotta Have It’ TV serial adaptation for Showtime? 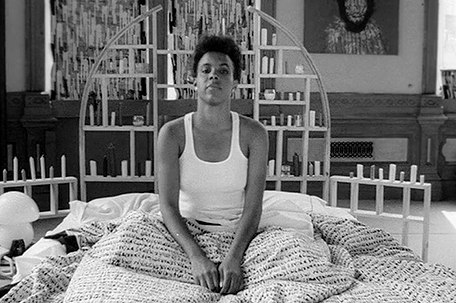 ABOVE PHOTO:  Tracy Camilla Johns as Nola Darling in a scene from Spike Lee’s “She’s Gotta Have It.”

Announced four weeks ago, Spike Lee is teaming up with Showtime to develop a half-hour TV series based on his cherished, though problematic feature film debut, She’s Gotta Have It – the feature film that essentially introduced Lee to planet earth (Joe’s Bed-Stuy Barbershop: We Cut Heads aside, his NYU Master’s thesis film, which won the Student Academy Award and got Lee an agent); a film that celebrated its 25th anniversary in 2011.

It’s also a film that was initially given an X-rating by the MPAA. Why? The exact quote, according to Lee, was that the MPAA said it was “saturated with sex.”

Thus Lee had to re-edit the film three times, and still then it was considered too risque; So he released it first in New York, unrated, but was contractually obligated to deliver an R-rated movie, if he wanted to get paid, and eventually did.

What was Lee’s response to the whole thing?

“I don’t think it’s out-and-out racist, but the film portrays blacks outside stereotypical roles, and they don’t know what to do with blacks in films. They never have any love interests. Nick Nolte is the one who has a relationship in 48 Hours. And when it comes to black sexuality, they especially don’t know how to deal with it. They feel uncomfortable. There are films with more gratuitous sex and violence. 9 1/2 Weeks got an “R.” And look at Body Double.”

Further details on the TV serial adaptation (like whether it’ll tell the exact same story the film did, with the same characters, who Lee might be considering for his cast, etc) aren’t yet available. It’s likely a bit too early at this point, with no specific ETA announced yet. It may not even make it to series (Lee has been here before; most recently, HBO passed on his Mike Tyson-inspired Da Brick, last year).

But I assume the Showtime adaptation will likely be set in the present day; and given that it’s on cable TV (premium), I expect Lee will deliver something for adults, “saturated with sex,” etc. And despite concerns among some that the series will come with similar problems the feature film did (notably, Lee’s handling of rape – something which he eventually came to admit he regretted), I’d expect that a She’s Gotta Have It TV series, written and directed by a much older, wiser, and mature Lee will hopefully reflect his “coming-of-age,” if you will.

Despite the fact that it is indeed early to discuss what the TV series adaptation will look and feel like, I’d still like to look ahead a bit, and consider what actresses Spike might cast as Nola Darling – a character that I think we can assume will be central to the serial, even if her three lovers, featured in the film, are absent.

And with that, a survey: Who would you cast as Nola Darling?

She’s the young, self-assured Brooklynite, juggling three very different boyfriends, who, maybe, if collected into one body, will represent her ideal mate. But Nola doesn’t want to commit to any of her men, cherishing her personal freedom, even as their relationships with Nola grow, and each man wants her for himself. What actress (likely between the ages of 25 and 35) exudes what we can assume will be Nola’s complexities – an intelligent, assertive, compassionate, sexual confident, and in control young woman artist, challenging existing stereotypes of women and sex, still, in the 21st century, 28 years after the film’s initial release?

Spike Lee did say, 20+ years ago, that he wrote the film with Tracy Camila Johns in mind as Nola. So one can only assume that, in adapting the film into a Showtime series, he could also very likely already have an actress in mind for the part. In fact, I wouldn’t at all be surprised, if he’s already approached her (whoever she is) about it.

Is this a role that has the black actress of the moment, “it girl” Lupita Nyong’o’s name all over it? After all, her lucrative Lancome deal aside, she has yet to book a role that I’d call substantial – voice work in a Disney animated film (The Jungle Book), and playing a social worker to Jake Gyllenhaal’s child in Antoine Fuqua’s boxing drama Southpaw. I think she naturally exudes the attributes necessary to play Nola Darling – as I’m assuming the character will be painted in the TV serial.

Or will Lee go with a relative unknown, as he did with his mystery Kickstarter-funded Da Sweet Blood Of Jesus, casting British actress Zaraah Abrahams – reminiscent of the Spike Lee of old, who provided launching pads for many *unknown* actors and actresses with his earlier films. Maybe he loved working with Zaraah Abrahams so much in Da Sweet Blood Of Jesus that he’ll cast her as Nola Darling; Lee has demonstrated in the past that he loves working with the same group of people once he’s developed a good working relationship with them.

But he certainly has a decent number of *known* actresses in that 25-35 age range to choose from, if he opts to draw from the existing pool. And depending on several key factors (notably, how great the series is, if it does happen), this could present a significant career boost for whomever is cast in the role – working with a widely-recognized filmmaker in Spike Lee, on a project that’s based on a cult film that’s itself a brand, we could say, that will air on a premium cable TV network like Showtime.