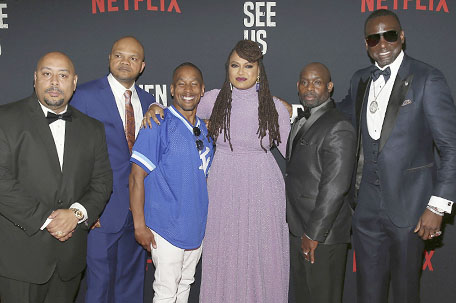 ABOVE PHOTO: Director Ava DuVernay, center, with the Central Park 5: Raymond Santana, from left, Kevin Richardson, Korey Wise, Anthony McCray and Yuesf Salaam, attend the world premiere of “When They See Us,” at the Apollo Theater in New York. A former prosecutor in the Central Park Five case has resigned from at least two nonprofit boards as backlash intensified following the release of the Netflix series “When They See Us,” a miniseries that dramatizes the events surrounding the trial. (Photo by Donald Traill/Invision/AP)

Yusef Salaam, 45, was 14 when jurors found him guilty of rape, assault, robbery and riot in connection with the assault of 28-year-old investment banker Trisha Meili, as well as separate assaults on two male joggers. Salaam served nearly seven years in an upstate juvenile detention facility — all the while, he was innocent. In a 2016 editorial published in the Washington Post, Salaam said the police officers that interrogated him, deprived him and his four co-defendants of food, drink and sleep for more than 24 hours. Today, the married father of 10 continues to speak out about his experience, and in 2016, Salaam received a lifetime achievement award from President Barack Obama.

Korey Wise, 46, was 16 when jurors convicted him of assault, sexual abuse and riot. Sentenced to 5 to 15 years behind bars, he was released after serving 12. After the verdict was read, Wise turned his attention towards the prosecutors. “You’re going to pay for this,” Wise shouted in court. “Jesus is going to get you. You made this up.” Today, Wise still lives in New York City, and is often asked to speak about his ordeal. Through his work with the Innocence Project, Wise also advocates for the rights of the wrongly convicted, as well as criminal justice reform.

Kevin Richardson — Works to free others

Kevin Richardson, age 44, was 14 when he was accused of attacking and sexually assaulting the Central Park jogger. Ultimately, he was convicted of attempted murder, rape, sodomy, assault and robbery, and served more than five years for a crime he did not commit. Richardson remains a resident of New York City and works with the Innocence Project, advocating for the rights of others who’ve been wrongfully accused.

Raymond Santana, 44, was 14 when was he was convicted of rape, assault, robbery, and riot charges. He served five years. Today, Santana lives in Atlanta with his daughter. Years ago, the filmmaker launched a clothing line called Park Madison NYC.  He donates a portion of the proceeds from the sales of one of his T-shirts touting the first names of the “Central Park Five” to the Innocence Project.

Antron McCray — Believes truth is the only way

Antron McCray, 45, was 15 when he was tried and found guilty of rape, assault, robbery, and riot charges. He was sentenced to five to 10 years in prison and released after serving six. McCray currently lives in the state of Georgia with his wife and children. He spends his spare time working out at the gym and riding his motorcycle. Last May, recounting his experience during a CBS interview, McCray explained how his wrongful conviction has impacted the way he parents his own children. He said, “I preach to my kids, ‘Just tell the truth. Be true to who you are.’ Honestly, the last time I lied, got me seven-and-a-half years for something I didn’t do.” He still struggles with the advice he received from his father, who is now deceased, to plead guilty.