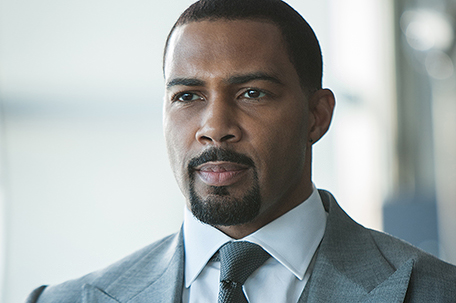 STARZ is known for stand out shows that bring people back season after season.  Now STARZ teams up with Executive Producer Curtis “50 Cent” Jackson and Series Creator Courtney Kemp Agboh, to bring us the original drama, Power.  The hour long drama stars Omari Hardwick as James “Ghost” St. Patrick , the biggest drug dealer in New York City.  Ghost covers his drug operation with his business front as the owner of an upscale nightclub.  He struggles with maintaining a powerbase in the drug world while balancing his duties as a nightclub owner, and commitment to his wife and children.  These challenges are amplified when Ghost’s long lost first love Angela Valdes, played by Lela Loren, reenters his life after 18 years. I had the pleasure of speaking with Omari Hardwick and Lela Loren about their roles in the show. 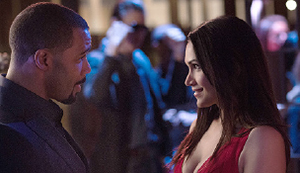 The themes of choice, betrayal, deception, love, and manipulation shine through the interactions of these complex multifaceted characters. Loren shared the following about her character Angela.  “The truth is as human beings we have so many different faces.” said Loren  “A lot of us compartmentalize ourselves at work, who we are with our family, (and) who we are with our friends.  Angela and James St. Patrick grew up together. We’re from a poor neighborhood in Queens. I got a scholarship to get out and I left my past behind. As adults we meet again.  His character was Angela’s first love, the big capital L-O-V-E, that sort of pure love before cynicism and all those other things that we as adults muddy the waters with come into play.  Angela cut that off when she left. Discipline, ambition, success and all those things with her job are a really great antidote to that…. but the truth is once you get a drop of it, you’re starving for it again, whether or not it suits you.”

“Power” takes the viewer through an emotional tug of war, as we witness the characters try to cling to their lives…as elements from their past make them question their current truth. As each character reflects on choice and change, we are left with an array of questions. Omari Hardwick shared his own assessment of these challenges. “When you watch eight episodes of this show, we don’t want questions answered.  In terms of the full arch, we don’t necessarily want to know where the characters are going.   I think that’s what attracted me to Ghost… he’s a ghost within a ghost.”  Hardwick continues, “She (Courtney Kemp Agboh) does a beautiful job of putting mirrors around the series as a character. After I run into Lela’s character, you see her staring in the mirror and pick herself apart or praise herself enough to put on a face that was familiar to me… not necessarily to her boyfriend’s character, it’s a different smile.  You see Ghost come home and he has to pick himself apart, with broken mirrors and tri fold mirrors.  Jamie is in one mirror, Ghost is in another. I’ve always said this guy is Pablo Escobar meets Cliff Huxtable. He ‘s all over the place.”  Loren echoed Hardwick’s thoughts. “What I liked about these characters was Angela is sort of on the hero side, but she’s got some really shady aspects to her character.  So who’s the hero and who is the villain is sometimes blurred in “Power.”  I appreciate that, because we as humans are messy.”

“Power” leaves us with a number of questions: When is ‘Enough, Enough”? Who is the hero, who is the villain?  How will the choices of each character impact their life and the lives of those connected to them? What are the characters willing to sacrifice and will it be worth it?  “Power” will leave you on the edge of your seat and will keep you coming back to get those questions answered.  “Power” premieres on STARZ Saturday, June 7th at 9 PM ET/PT.  Be sure to tune in, you don’t want to miss it!

Omari Hardwick of “Kick-Ass” has arrived!