What to expect in Season two of ‘Empire’ 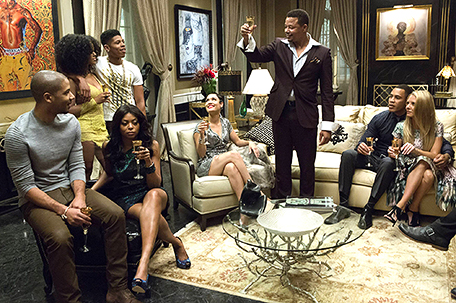 Some news gems dropped in this Hollywood Reporter profile of Lee Daniels and his mega-hot Fox series, “Empire,” that fans of the primetime soap opera will probably appreciate knowing.

•  First, the show is a draw for countless entertainers that want to guest-star in it, as others have this season: “The producers likely will discuss the deluge of requests they’ve received from potential guest stars.”

•  And directors, too want some of the action, like none other than Spike Lee: “Daniels has been most struck by Spike Lee, who he says has reached out about helming an episode. ‘That’s when I realized what a beast Danny and I have created,’ says Daniels.”

•  Expect a longer season when season two returns next year: “Empire will return with more than the first season’s 12 episodes, though how many more is a topic of much debate.”

Apparently co-creator Danny Strong and Daniels disagree on how many episodes. Daniels wants to keep it at 12, while Strong wants more than 12; although likely not the typical 22-episode season of other TV series.

•  In terms of what to expect from the writing staff next season, Daniels and company would like to take audiences back to the Lyon family’s more modest beginnings:  ‘I think we’ve seen the opulence,’ he says, ‘but now we have to go back to where they come from,’ he said.

•  And to assist with bringing that experience to life, the show is bringing in more writers of color “Although the creative team is set to take a break before season two planning begins in earnest, Strong and showrunner Ilene Chaiken have been busy bulking up the writing staff. ‘I wanted to bring in some playwrights because we have these delicious soap turns but we also have very layered character development,’ says Strong, who has been courting emerging African American talent.”

•  And while season two isn’t really expected until early 2016 when it will return as a mid-season replacement once again, Fox hasn’t ruled out bringing it back earlier than that, if only for fear of losing impatient audiences. Don’t be surprised to see the series come back before midseason.”

•  Finally, in reference to the self-fulfilling prophecy that black content doesn’t sell overseas, Fox says that, initially there wasn’t a lot of interest from foreign broadcasters. But once the show’s ratings began ramping up from week to week, that changed.

I do wonder if the show’s creators can carry its current momentum into and through a second season. When it does return, will fans be as hungry as they are now, especially with a lot more competition likely on the way? I think Fox is probably right to consider bringing the show back earlier than mid-season. But that would mean even less time to put a solid season together.

Read the full piece at http://www.hollywoodreporter.com/news/fox-plots-empire-season-2-780553.