What new shows with Black actors might be coming To TV this Fall? We have a full list for you! Part two 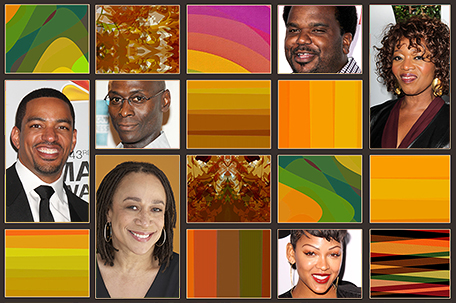 In rather early anticipation for 2014’s Fall Season TV’s slate – official announcement on actual pilots that have been picked up by networks hasn’t been released – we’ve compiled a rather thorough list of fall’s upcoming shows divided by their respective Networks.

Those TV series beginning this spring and summer are not included, like Zoe Saldana’s starring turn in the NBC mini-series remake Rosemary’s Baby (May 11), Halle Berry as an astronaut in the CBS sci-fi series Extant (July 2) and STARZ’s 50-Cent produced drama series Power, which stars Omari Hardwick and Naturi Naughton (June 7).

Here are projects in development – that we know of –  about and/or centering on black characters. We’ve also included upcoming shows with black characters in a supporting role. Keep in mind that the list isn’t exhaustive, and that it’ll be continuously updated as new announcements are made.

Here are the rest of the 2014 Fall Season offerings featuring many of your favorite actors:

American Horror Story: Freak Show – Set in Jupiter, Florida, in 1950, Freak Show finds Jessica Lange playing a German ex-pat who is managing one of the last freak shows in the USA. Her group of freak show performers include Angela Bassett along with returning stars, Kathy Bates, Sarah Paulson, Evan Peters, and Frances Conroy – all acts whom Lange’s character has rescued, and who will do anything to make sure that their business sticks around.

Untitled Project – From Diallo Riddle and Bashir Salahuddin, the half-hour comedy series will star Riddle and Salahuddin as two young reporters trying to make it big in Atlanta.

Babylon’s Field (Drama Pilot) – set in a place called Babylon, NY, the dead are coming back to life, as their bodies regenerate, and they grow stronger than the living, leading to the scary suggestions that they just might be the next step in human evolution. Meagan Good plays a Dr Janine Beltran, local to Babylon, NY, who has “an edge to her,” and S. Epatha Merkerson will play Pearl Montoya, Janine’s (Meagan Good’s) stepmother. Oddly enough, in Deception, she played Good’s mother.

The Blacklist – the thriller series will guest star Lance Reddick, who’s playing a character known as “The Cowboy,” one of James Spader’s character’s many assets, who’s given an assignment that leaves his boss in shock. Reddick just ended a recurring gig on American Horror Story: Coven.

Feed Me – starring Mary Louise Parker, the comedy focuses on a dysfunctional family that co-owns and operates a restaurant. Toks Olagundoye (The Neighbors) stars as Meryl, the serious girlfriend-turned-fiancee of one of the family’s grown siblings.

Marry Me – the comedy centers on a young couple who get engaged, and quickly realize being potentially married isn’t all that they expected it to be. Tim Meadows will play a character named Kevin, who’s one of two gay fathers of the soon-to-be bride.

Mason Twins – the comedy tells the story of two fraternal twin sisters, who reunite after being estranged since high school. Windell Middlebrook will play a character named Chance, who’s described as an unkempt gay man who was one of the twins’ best friend in high school.

Mr. Robinson – written by Owen Ellickson (supervising producer for The Office) and executive produced by Greg Daniels, the comedy series follows a talented musician (played by Craig Robinson) with rough edges, who adjusts to his new life as a music teacher in a big-city middle school, where he encounters teacher politics and the temptations of single moms. Larenz Tate plays Craig’s character’s brother – and partner in the duo’s band called The Filthy Gentleman – further described as a charismatic lady-killer who has never held a regular job, thanks to his musical talents, and who thinks Craig’s dedication to his students is a waste of time. Amandla Stenberg plays a spunky, fearless and smart 8th grader, desperate to learn to sing despite the fact that she can’t, with Craig’s character reluctant to teach her.

The Mysteries of Laura – based on a popular Spanish series, the crime drama stars NBC alum Debra Messing as Laura, a homicide detective navigating life and love. Laz Alonso co-stars as Billy, her partner in crime.

One Big Happy – the comedy follows two childhood friends – a lesbian played by Elisha Cuthbert, and her straight male best friend, played by Nick Zano – who have been living together for some time, while trying to have a baby via artificial insemination. They finally get pregnant, just as the man meets and impulsively marries the love of his life, played by Kelly Brook. Chris Williams plays Roy, a former college football player, now married, who misses the freedom of his single lifestyle.

State of Affairs – the show is about a CIA officer, Katherine Heigl, “who becomes President Roberta Payton’s (Alfre Woodard) daily briefer, assuming responsibility for targeting America’s most critical threats while navigating the unique lifestyle that comes with such a high-powered job.” The twist is that Heigl’s character is also President Payton’s late son’s ex-girlfriend. Leslie Odom Jr. is also in the cast, playing a character named Mitchell Manning, who’s Chief of Staff to the President. Joe Carnahan, who directed Smoking Aces, The A-Team and The Grey, will direct the pilot and will also be its executive producer if the network orders it into series.

Taxi Brooklyn – directed by Olivier Megaton and produced by Luc Besson the comedy series follows Detective Caitlyn Sullivan, who is investigating the death of her father, an NYPD veteran. She is demoted to foot patrol for her recklessness behind the wheel, and thus teams up with the highly-skilled and charming cab driver named Leo Romba, played by Jacky Ido. Detective Sullivan finds out that Leo is an undocumented immigrant and essentially offers him help with his residency papers in exchange for his driving prowess and use of his taxi. So he becomes her driver and partner of sorts, as they race through NYC streets solving cases.

Tin Man (Pilot) – written by Ehren Kruger, the thriller centers on a robot played by Patrick Heusinger, who is accused of killing his creator. Vondie Curtis-Hall will play a veteran homicide detective who is brought in to investigate the murder.

Single Moms Club – the 1-hour drama series which follows a group of single mothers from different walks of life brought together by an incident at their children’s school. The mothers bond and create a support group that helps them find comedy in the obstacles of life, and inner strength to overcome their personal challenges. Tyler Perry’s “Single Moms Club” is written, produced and directed by Tyler Perry and is produced by Tyler Perry Studios.

Survivor’s Remorse – written by Mike O’Malley (Shameless), the drama follows Cam Calloway, a basketball phenom in his early 20’s who is suddenly thrust into the limelight after signing a multi-million dollar contract with a professional basketball team in Atlanta. Cam, along with his cousin and confidant Reggie Vaughn, move to Georgia to start Cam’s journey to success. The two confront the challenges of carrying opportunistic family members and their strong ties to the impoverished community that they come from. Cam, Reggie and a group of supporting characters wrestle with the rewards and pitfalls of stardom, love and loyalty. Jessie T. Usher plays Cam Calloway, Ronreaco Lee plays Reggie Vaughn, Erica Ash plays M-Chuck, the sister of Cam Calloway, and Tichina Arnold plays Cassie, Cam’s mother. They join Teyonah Parris who plays Reggie’s wife Missy. Mike Epps plays the uncle of main character Cam Calloway (Jessie T. Usher), who moves from the projects to the family mansion once his nephew scores a huge pro contract. The series will be produced by LeBron James, Tom Werner, Mike O’Malley, Maverick Carter and Paul Wachter.

Guilt By Association – the drama hails from former prosecutor Marcia Clark, who gained fame as the head prosecutor in the O.J. Simpson murder case. The series will be based on a book she wrote. Guilt By Association centers on a Deputy District Attorney in the Special Trials Unit of the Los Angeles County District Attorney’s Office, who works closely with a tough female LAPD detective and female prosecutor. Rose Rollins will play the latter.

Proof (Pilot) – the drama/supernatural series will star Jennifer Beals as a brilliant but somewhat jaded female surgeon, still struggling with the devastating death of her son, who begins investigating cases concerning reincarnations, haunting, out-of-body experiences, and other supernatural phenomena. Joe Morton will play Dr. Charles Russell, the tough and intimidating chief who runs the hospital where Beals’ character works.

Public Morals – written/directed by Ed Burns and executive produced by Steven Spielberg, the crime drama is set in New York City’s Public Morals Division, during the late 1960s, where cops walk the line between morality and criminality, amid temptations that come with the job. Burns stars as one of the better cops, who is determined to raise his kids on the straight and narrow, within the filthy world in which he works. Ruben Santiago-Hudson has signed up to play his boss, Lt. King, who’s described as a womanizing bad-ass, who’s also loved and respected by his peers and underlings.

What new shows with Black actors might be coming To TV this Fall? We have a full list for you! Part One