What is it “About Last Night?” 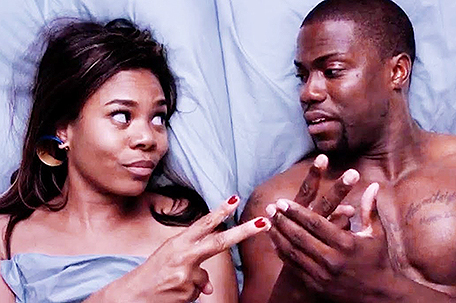 Valentine’s Day is the holiday of love…i.e. the time of year where we hear a barrage of folks telling us how to dial up the romance for that one special day. The fixation on this one-day celebration of love often overshadows the love experienced on the other 364 days of the year. What about the good, bad and irrational that comes with loving someone passionately on a daily basis?  Will Packer, Kevin Hart, Regina Hall, Michael Ealy, and Joy Bryant team up to give us an emotionally charged, hilarious dose of just how unpredictable everyday love can be in the romantic comedy About Last Night.

The story centers around four best friends. Kevin Hart plays Bernie, the over the top, commitment-phobe, and best friend to Michael Ealy’s character…the doting, hopeless romantic Danny. Regina Hall plays Joan, the uninhibited, outspoken, meddlesome best friend of Debbie. Joy Bryant rounds out the cast as Debbie, the quiet, demure, businesswoman who has all but given up on love. The story propels the viewer into an ocean of laughs, when not one, but two one-night stands happen between Bernie and Joan, and Danny and Debbie.

About Last Night, based on David Mamet’s play “Sexual Perversity in Chicago,” is a rib-tickling depiction of today’s dating scene and the insanity that can ensue. Some of the scenarios in this movie will have you in stitches! Recently, I got the chance to speak with Hall, Hart, and Packer about their work on this film. I wanted to hear about Hart’s real life dating debacles. He said, “Well sweetie to be honest with you, I’m what you call a perfect man… there’s no room for error,” which led Hall to laugh and say “I tried to warn y’all”. Hart and Hall have worked on six films together, and their onscreen chemistry is a direct reflection of their camaraderie off-screen.  I asked Hall what it was like working with Hart and she said, “When you see people like Kevin get to a level of success, there’s professionalism behind the camera. It’s energy but it’s channeled, they’re strategic and they love to entertain. It’s fun working with people who are naturally funny. They know when to turn it on, when to turn it up, and when to dial it back, so it’s always great.” Hart had equally nice things to say about working on this project with his co-star. “Anything that gives you an opportunity to show depth you take it. You try to step up to the plate and knock those balls out of the park. I took this role because it was different and I got to work with Regina. We got to play characters with levels. It was a no-brainer to me.”

Will Packer, who is rightfully one of the most sought after producers in the business, has achieved a great deal of success with films like: Think Like A Man, Ride Along (currently number one in the box office three weeks in a row) and I believe that About Last Night is the next to follow.  I asked Packer how he chooses his projects.  “You know, to me it’s a balance of creative, commercial, and critical viability.  I look at a project and say, is there a story to be told? Is this going to make people feel something? It doesn’t have to have an overriding message…it could be just pure entertainment. It can be escapism, but that’s what movies are about when they’re at their best.”  “I never want you to leave a Will Packer movie saying I wasted an hour and a half of my life,” Packer continued. “I’m proud of About Last Night. It’s a contemporary look at relationships. This is an unsafe film.  This isn’t a film that’s just typical…where everyone acts the right way, and they break up and get together at the end.  It’s edgy, It’s adult. It’s got language that’s in your face, imagery that’s in your face and I like that about it.  I think audiences are ready for this.”

Unsafe and unpredictable, About Last Night gives the audience the nitty-gritty that so many other romantic comedies dance around. It shows the viewer what can happen when nosy friends, unfortunate work circumstances, the mundane, denial, and the lack of communication can do to a relationship.  This film appeals to everyone, whether you’re single, whether “it’s complicated”, or you’re married you’ll laugh and be able to relate.  About Last Night is in theaters nationwide on Friday. Treat yourselves this Valentine’s Day by going to see it!