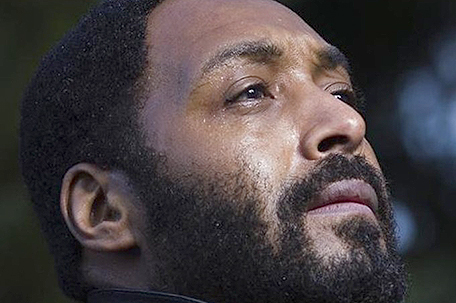 ABOVE PHOTO:  Jesse L. Martin in character as Marvin Gaye

I was updating my annual list of announced biopics of black public figures that still haven’t been made, and, while researching to find out if there have been any updates on Jesse L. Martin’s Marvin Gaye film, I found a couple of recent items that we missed.

First, on September 23, director F. Gary Gray teased, while talking to TMZ, that, while he’s not exactly looking forward to making another biopic (after this year’s  Straight Outta Compton this year), one that would make him change his mind is if he were asked to make a film on the life of Marvin Gaye. TMZ caught up with him in Los Angeles, and asked what he’d like to do as a follow-up to “Compton.”

“All the things he talked about in his albums and what is going on is relevant now,” Gray said, calling Marvin Gaye his favorite artist. “He was ahead of his time. His story is somewhat Shakespearean.”

Second, skip ahead to just two weeks ago, December 9, to an exclusive on Roger Friedman’s Showbiz 411 blog, saying that F. Gary Gray had made a deal with producer Suzanne dePasse and Motown founder Berry Gordy to bring Gaye’s life to the big screen, adding that Gaye’s family is involved as well.

Friedman’s report was short, without much in terms of details. None of the other mainstream industry media sites reported on this, but we’ve published past exclusives from Friedman’s blog, and just about every single one of them eventually turned out to be true. So I don’t have any reason to believe this one is not.

In addition, I also dug into the S&A archives for any connection between Gray and Gaye in the past, and found a 2009 post in which it was announced that F. Gary Gray was attached to direct a Marvin Gaye biopic, with C. Gaby Mitchell (Blood Diamond) onboard to write the script. No studio was attached at the time, with producers of the project shopping to studios and financiers a package that included complete music rights to Marvin Gaye’s catalog, with plans to have the star of the film lip synch to Gaye’s recordings. No actor was attached at the time.

Gray, who had long wanted to tell Gaye’s story (and apparently still very much does), faced music rights problems. “This is my passion project, the one that I wake up every day thinking about,” Gray told Variety in 2008, adding, “I’m going to tell a truthful story, and there is no shortage of drama and extreme conflict in a relationship with his father that at its core is Shakespearean and tragic.This isn’t the average biopic of a rock star wrestling with drugs and women, but a man whose musical awakening became a call to action that questioned critical issues like a costly foreign war, recession, environment, inequality – issues that are relevant now.”

The music rights were eventually secured for the project, but a film was never made, very likely because no studio would finance it.

It was also around this time that a rival Marvin Gaye film titled Sexual Healing, that was to be produced by the late James Gandolfini, and was to star Jesse L. Martin, was in development. That project, which was to focus on the singer’s declining years (unlike Gray’s, which would cover Gaye’s entire life), didn’t have rights to Gaye’s full music library. That film would also face challenges, and, many years later, still isn’t complete, despite actually beginning filming three plus years ago.

In mid-2013, it was announced that filming on Sexual Healing had been suspended. Julien Temple was directing, with S. Epatha Merkerson (as Marvin’s mother, Alberta Cooper Gay), and Dwight Henry (as Marvin’s father, Marvin Gay, Sr.) joining Jesse L. Martin in front of the camera. David Harewood, Clarke Peters and Brendan Gleeson were also part of the cast.

It was reported that there was a possibility that the film might not see completion (at least, not immediately after that revelation), because Focus Features International, the company that picked up the project initially, and shopped it at the Cannes Film Festival that year, had pulled out.

Reasons for Focus’ exit weren’t given unfortunately (unless we just missed that announcement), although, at the time, I thought that it might have something to do with what follows.

Crew members were said to have not yet been paid fully for their work on the film, with one of the film’s producers, Jimmy De Brabant, telling ScreenDaily that there was apparently a cash flow problem with the American investor backing the film; although he added that the funding that was promised by this investor had not yet arrived, but emphasized patience with the film’s cast and crew, suggesting that the money was indeed coming.

At the time, it was said that about 70 percent of the film had been shot.

Although I’m still really curious to hear Focus Features’ reasons for dropping out. There might be more to this than is public currently.

It’s still not clear to me where the project stands – whether the financing eventually did come, or if production is still in Limbo.

Less than two years ago, I shared a promo reel featuring footage from the Jesse L. Martin project, and it was eventually pulled and disappeared from the web. But, it’s back online again, so check it out below if you missed it the last time.

The film is set in the early 1980s, and focuses on the making of the Midnight Love album, while Gaye was living in Belgium – a drug addict, considered something of a has-been at the time.

Principal photography was taking place in Luxemburg and Belgium. I really hope it’s not dead. As I recall, when it was announced that Jesse L. Martin would be playing Gaye, it was met with much excitement, with many applauding the news as perfect casting.