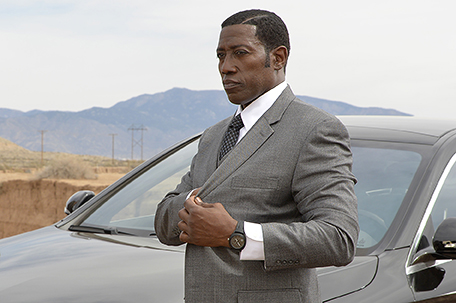 Wesley Snipes is perhaps best known for his role as Blade, the human with vampire genes in the movies based on from the comic book trilogy of the same name. The veteran thespian has an impressive pedigree and a resume’ with movies which have grossed over $415 million combined at the box office.

A master in the martial arts, Snipes was born in Orlando and got his big career break in 1986 when he landed a role in opposite Goldie Hawn in Wildcats. He subsequently appeared in an episode of the hit TV-series “Miami Vice,” and a year later was cast by Martin Scorsese in Michael Jackson’s music video “Bad.”

Larger roles quickly followed, including co-starring turns in such films as Passenger 57, Demolition Man, Money Train, The Fan, Rising Sun, New Jack City, White Men Can’t Jump and To Wong Foo, Thanks for Everything! Julie Newmar. Among his additional TV credits are outings on “The Days and Nights of Molly Dodd,” “America’s Dream” and “The Bernie Mac Show.”

Snipes has won a couple of NAACP Image Awards (for New Jack City and America’s Dream). And on August 21, 1998, he had his star added to the Hollywood Walk of Fame.

Kam Williams: Hey, thanks for another interview. I appreciate having the opportunity.

WS: Well, first of all, the interesting opportunity to get into the television game, and to work with some talented people behind the scenes, producers who have a track record of success, particularly in a genre that I’m attracted to. And then they sent me one of the better action scripts that I’d read in a long time in which I get to play a cool boss of bosses.

KW: Yeah, it looks like it has feature film quality action sequences.

WS: It’s a heck of an undertaking, but that’s definitely our goal. Where we may not have a lot of quantity, we at least have high quality. and some great, great plot twists. some of the things they have planned this season are really exciting for me as a film actor.

KW: Tell me a little about Mr. Johnson, the pit boss?

WS: He’s the kind of friend you’d love to have. He’s the guy with the best connections, the best hook-ups, the best arrangements. He always has the box seats and the courtside seats… He knows where the body’s at, but keeps his mouth shut, and can help you get rid of it, if needed.

KW: Is there a consistent message that each episode is trying to convey?

WS: Each episode would be a stand-alone event that has some carryover from episode to episode. The underlying message about the various characters–who they are and what their hidden agendas are–will play out over time. But the actual game, the actual wager, will stand alone from week to week.

KW: How do you enjoy shooting in Vegas?

WS: The idea of being around these individuals who have $10 million a night credit lines is very exciting. Watching this show, we can all live vicariously and get a sense of what that lifestyle is like.

KW: Have you collaborated with any of your fellow cast members before?

WS: No, this is my first time working with them.

WS: [Laughs] We had a pretty good idea of doing not exactly a remake but an evolution of The Sting. It would be fun to do something like that with Woody [Harrelson].

WS: [LOL] I’d say I’m much more laid back and easygoing at home, and maybe even funnier. People think of me as a pretty serious guy, but my family knows me to be fairly whimsical.

WS: IHmm…. Yes, I promised myself I would take a world tour of all of the world’s best roller coasters, and I still haven’t done that.

KW: The Judyth Piazza question: Is there a key quality you believe all successful people share?

WS: I As a great contributor to humanity through my art.

WS: Good question. I can’t remember because I’ve been too bogged down with scripts to read anything else lately. The last script I read was a crime thriller.

WS: Hearing my children’s laughter and after a great workout.

WS: I’m going to go with anything that would allow you to control the elements.

KW: Attorney Bernadette Beekman asks: Do you have a favorite charity?

WS: Do I have a favorite charity? No.

KW: The Rudy Lewis question: Who’s at the top of your hero list?

WS: Who’s at the top of my hero list? Man! How far do we want to go back? To Job? You talk about a cat who went through the fire and came through it on the other side. I admire all the trailblazers on the community and entertainment level who opened doors and cleared pathways but never got any recompense or recognition for making great sacrifices. Trailblazers rarely get any recognition until after they’re die, unfortunately. Things kinda work that way.

KW: Is there anything you wish people would note about you?

WS: That I live by the Golden Rule, treating others in the way that I’d like to be treated. And that I’m divinely inspired and in this for spiritual reasons. The money’s always gonna come.

WS: Oh yeah, I was baptized in Canaan Baptist Church in Harlem. From there, I went to Mount Zion Baptist Church down in Orlando, Florida. And then I came to New York. That’s where the brothers on the corner grabbed me and started teaching me mathematics and pre-mathematics. That was a trip in itself. [Laughs] Can you imagine studying supreme mathematics and pre-mathematics while you’re studying classical acting and Aristophanes and Shakespeare with a predominantly-white theater group? It was a very interesting combination. [Laughs some more]

WS: Get into the movie business. [LOL]

WS: [Laughs] A whole bunch of misinformation just in case I lose it.