Wendell Pierce calls his ‘Death of a Salesman’ a ‘watermark’ 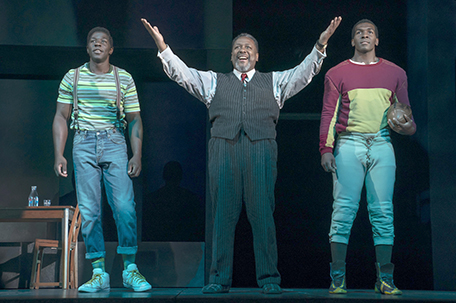 ABOVE PHOTO: This image released by DKC/O&M shows McKinley Belcher, from left, Wendell Pierce and Khris Davis during a performance of Arthur Miller’s “Death of a Salesman” in New York. (Joan Marcus/DKC/O&M via AP)

NEW YORK — Wendell Pierce hopes that heading a Black-led cast in a historic revival of Arthur Miller’s “Death of a Salesman” goes beyond exposing the classic American play to a new audience.

Pierce stars as the aging travelling salesman Willy Loman and Sharon D Clarke plays his loyal wife, Linda. With only a few minor changes, the play remains intact with the Loman family Black. Pierce sees parallels between the struggles Willy Loman faced in 1949 and what Black families currently face in search of the American dream.

“The dream can become a nightmare,” Pierce said.

But he says many of the play’s themes remain universal, especially the question of “Are my best days behind me?” as Loman fails to adapt to world around him.

Pierce, best known for starring in the HBO crime drama, “The Wire” as Detective Bunk Moreland, called playing the iconic character “the high watermark” of his career.

“The best thing about being an actor is the fact that we are students of human behavior. We’re the closest thing to what therapists do and to understand what it is about the human psyche that induces the behavior that we see in our lives, whether is dysfunctional or healthy,” Pierce said.

The Tony-winning Pierce starred in the play when it made its West End debut in 2019 with Clarke, who took home an Olivier Award for her efforts. Pierce, who earned a nomination, won his Tony for his work in the 2012 play “Clybourne Park.”

The British-born Clarke credits Miller with writing a play that’s so timeless in its themes that it resonates wherever it’s performed.

“People understand it. It talks to the working man. It talks to the common family. And I think now having an African-American family at the helm, what you see is the impossibility of chasing the American dream,” Clarke said.

Miranda Cromwell, who won an Oliver with Marianne Elliott as co-director, helms the Broadway production on her own. The supporting cast includes Khris Davis, McKinley Belcher III and Delaney Williams.

Tony-award winner Andre De Shields, who plays the ghost of Willy’s older brother, Ben, says he jumped at the chance to introduce Miller to a new audience.

“It’s revived for a demographic of the culture who has yet to experience the accessibility of the American dream, which is at the core of the play. That’s why the Loman family is Black,” De Shields said.